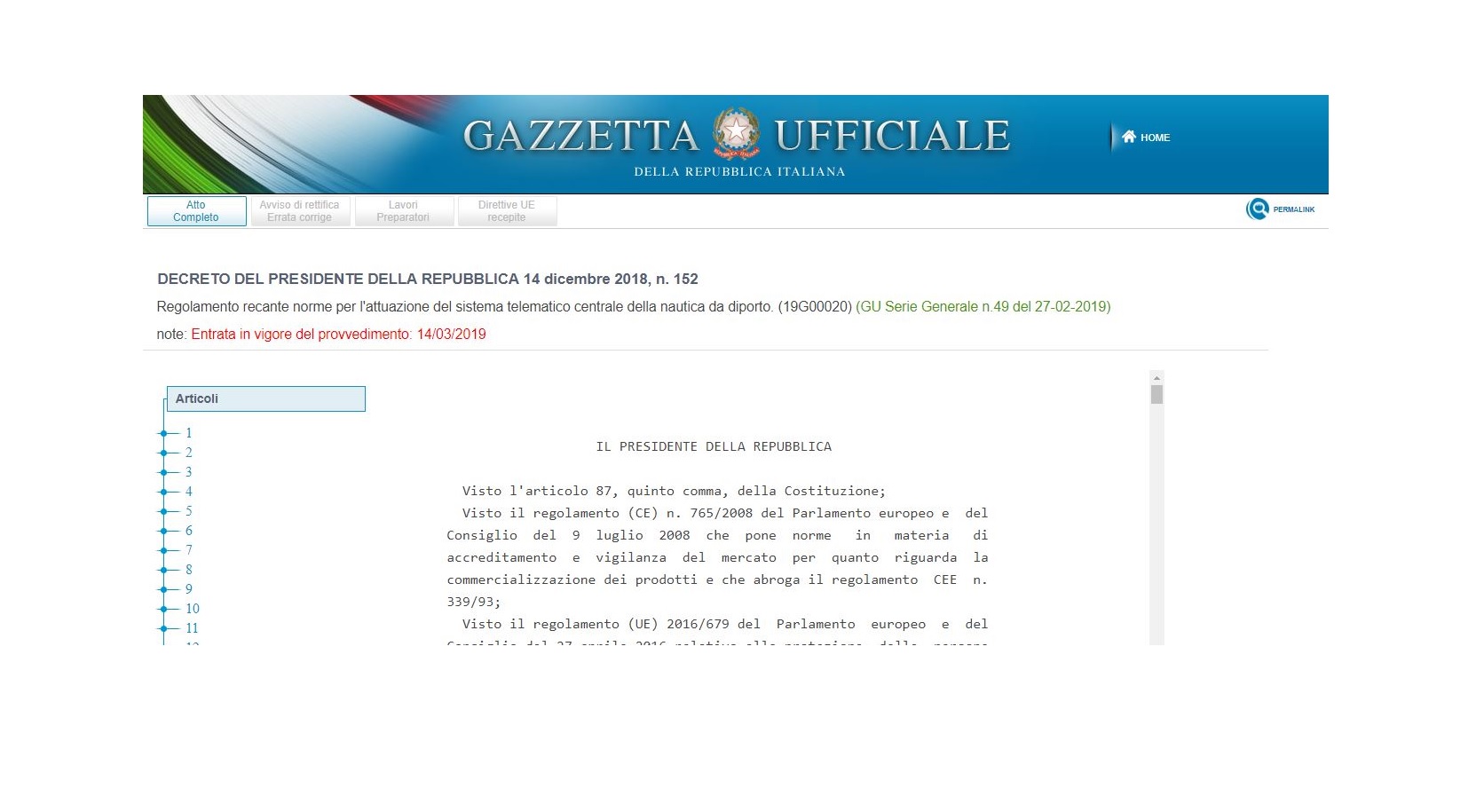 THE ELECTRONIC SYSTEM WILL ENTER INTO EFFECT ON 14th MARCH

Legislative Decree n. 152 of 14th December 2018 was published in the Official Gazette of the Italian Republic, in order to implement the Centralised electronic register for recreational boating, scheduled to enter into effect on 14th March this year.

The decree’s framework was specified by the recently updated Nautical Code – in effect since 13th February 2018 – which required the implementation of a Centralised electronic register including a Centralised electronic archive – set to contain technical, legal, administrative and conservation-related information regarding recreational vessels – and an Online portal for registered boat enthusiasts.

The rules published in the Official Italian Gazette specifically regulate how the System is to be organised and how it should function.

“After three years of commitment and determination, we welcome the Centralised Electronic System and its implementation decree’s publication in the Official Gazette with open arms, the successful outcome of close collaboration with the Italian Leasing Association, Assilea, and Confarca, set to make a significant difference in terms of simplified bureaucracy and doubled checks at sea – stated UCINA President Carla Demaria -. A ground-breaking achievement, although a number of queries regarding certain organisational aspects identified by financial institutions, boating agencies and the Administration itself appear to have fallen on deaf ears”.

The impact of a Centralised electronic system

The decree regulates how the Electronic system (SISTE) will function, specifically the progressive digitization of recreational boating registers and of the assignment of boating documentation, which for new units will be operational from January 2020.

Specifically, this will bring about a radical simplification and rationalisation in terms of how the registers will be kept for recreational boating units, currently managed on paper independently for each maritime area and soon to be entirely digitized.

The decree will also see a concentration of conservation duties into a single authority which will operate on a national scale and the creation of online portals for registered boating enthusiasts (STED) – actual agencies distributed across Italy in direct communication with the centralised database – for users to access with regards to all registration and deletion operations for recreational boating units in their relative registers and to the assignment of boating documentation.

At the same time, physical insurance contract slips will cease to exist for third party responsibility with regards to damages from recreational boating units and will be replaced by the electronic communication of the relevant data to the ATCN (or Centralised electronic archive for recreational boating units of the Department of transport, sailing, general affairs and personnel under the Ministry for Infrastructure and Transport), as will partially be the case for car insurance.