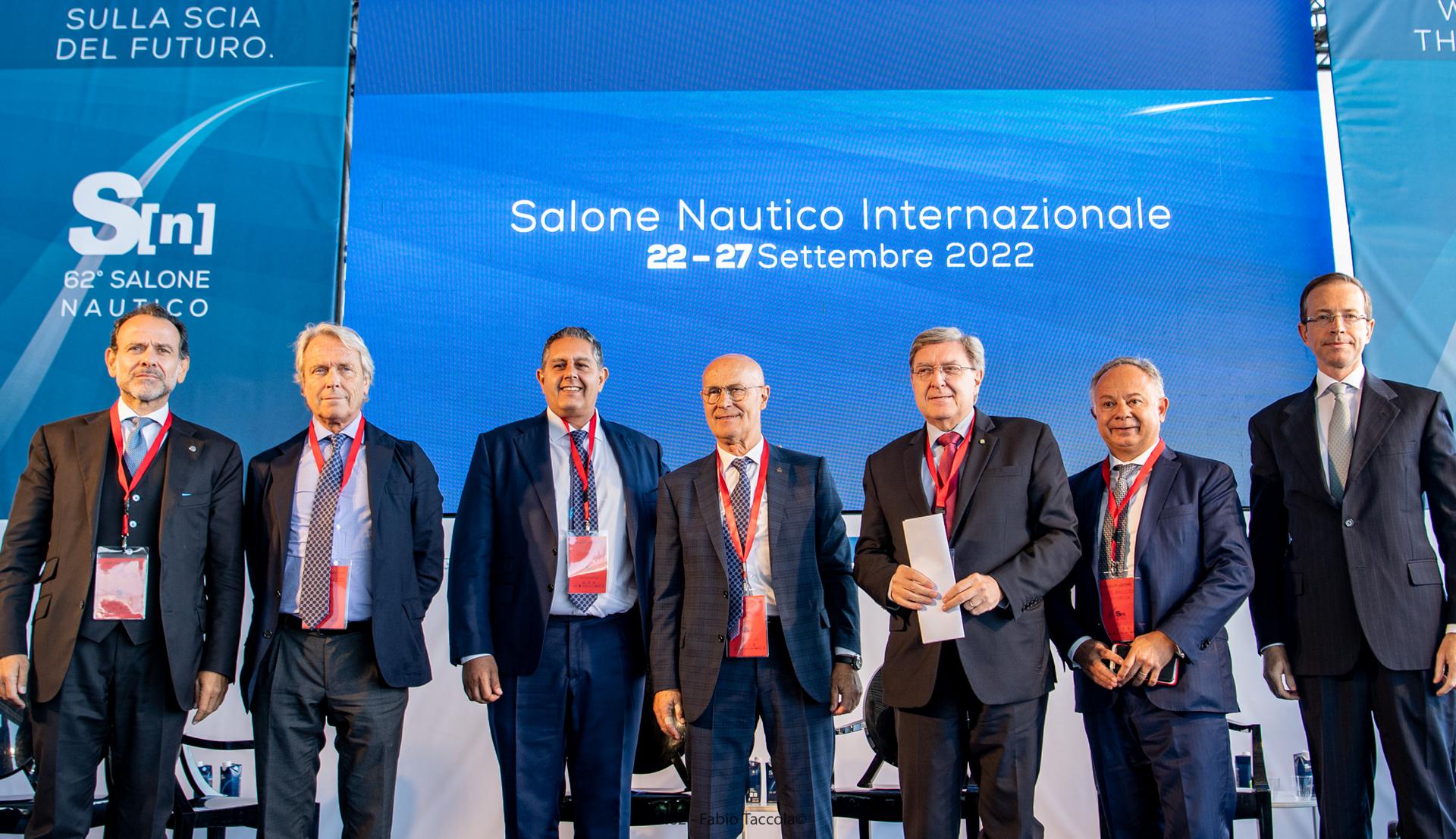 GIOVANNINI: “THE REGULATION IMPLEMENTING THE BOATING CODE IS NOW READY TO GO”.

GARAVAGLIA: “THE YACHTING SECTOR IS A CRUCIAL COMPONENT OF THE TOURISM INDUSTRY”.

BONOMI: “TO DEVELOP THE MARINE ECONOMY IS A PRIORITY, WE NEED INVESTMENTS TO SUPPORT INTERNATIONALISATION AND THE ENERGY TRANSITION”.

TOTI: “THE GENOA MODEL IS ALSO THAT OF THE FAIR, NOW TRULY A CANDIDATE TO BECOME THE WORLD’S NUMBER ONE SHOW

BUCCI: “GENOA IS THE BOATING CAPITAL OF THE WORLD AND THE NEXT BOAT SHOW WILL HAVE A NEW WATERFRONT”.

FERRO: “IN THE FIRST 6 MONTHS OF 2022 THE BOATING INDUSTRY GREW FASTER THAN THE COUNTRY’S FIGURES”.

CECCHI: “A STRIKING FIGURE IS THE NUMBER OF PEOPLE EMPLOYED IN THE BOATING INDUSTRY IN 2021, SHOWING A 10% INCREASE”.

The spectacular passage of the Caio Duilio, the Italian Navy’s destroyer, embellished the traditional flag-hoisting ceremony, as she paraded along the harbour’s canal.

The opening ceremony was kicked off by the greetings of the authorities present: Mayor of Genoa Marco Bucci, President of the Western Ligurian Sea Port Authority, Paolo Emilio Signorini, Commander General of the Harbour Offices, Nicola Carlone, Commander General of the Guardia di Finanza Giuseppe Zafarana, the Chief of Staff of the Italian Navy, Enrico Credendino, and the Italian Government Minister of Tourism Massimo Garavaglia.

This was followed by the Inaugural Conference ‘The yachting industry: growing in Italy, conquering the world’, moderated by journalist Antonio Macaluso, who traced from Genoa a course of excellence, innovation, and sustainability for the Made in Italy brand that characterises an industry, that of yachting, among those that have best reacted to recent international crises.

Marco Bucci, Mayor of Genoa: “Genoa wants to be the nautical capital of the world, able to host international events thanks to increasing investment in the Eastern Waterfront. In June 2023 we will host The Ocean Race Grand Finale and the sports arena and waterfront areas will be completely rebuilt. The next Show will be able to host 200 more berths, offering a brand new area, that of the Foce, which will be involved in a major urban regeneration project. The idea, conceived together with Confindustria Nautica (the Italian Marine Industry Association) is to sign a new ten-year agreement in 2024, when these new locations will be handed over to the public, areas that are truly unique across Europe.”

Enrico Giovannini, Italian Government Minister for Sustainable Infrastructure and Mobility: “Today the Italian GDP is back to the same levels as in 2011, recovering in 6 quarters 10 years of stagnation and difficulties, we are at an all-time high in employment and productivity has increased. In this year and a half of government a great deal has been done in terms of infrastructure, reforms and planning, working on the Confindustria document on the economy of the sea. After far from trivial work, the Regulations implementing the Nautical Code are ready to go and are about to be sent to the relevant administrations over the coming days. The economy of the sea is an absolutely necessary condition, however, its development must be combined with that of land and rail transport, and logistics. Genoa is an example of this with the Third Pass. That is why I do not believe in the establishment of a Ministry of the Sea when in fact simplification is needed. What counts today is the ability to read the signals coming from the real world, from the world of business and society. In this sense, the eco-transition should also be seen as an extraordinary business opportunity for companies and the country.”

Massimo Garavaglia, Italian Government Minister for Tourism: “The yachting sector is a very important component of a complex tourism industry: we exceeded the numbers in 2019, which was a record year. All this despite the first four months of relative closure. The next big challenge is energy, however we managed to pass an important decree thanks also to the numbers achieved by services and tourism, which gave us room to manoeuvre until the end of November. We know our position in terms of concessions which need to be taken care of with caution, however we happily can look to a serene future thanks to the importance of a sector like the yachting industry which can count on unmatched quality and excellence”.

Carlo Bonomi President of the General Italian Industry Association also joined in to greet the event’s guests: “the country and businesses have experienced a ‘perfect storm’ after a pandemic that cost 9 percentage points of GDP, a rise in energy and commodity prices that began a year ago and was then exacerbated by the invasion of Ukraine. Industry did its part by achieving a record in exports in 2021, 551 billion, almost all of it from the manufacturing sector, and we also performed well in the first quarters of the year. Businesses are a key reference point in terms of employment. I have always fought for the marine economy to be a development priority, we need investments to support internationalisation and the energy transition.”

Saverio Cecchi, President of the Italian Marine Industry Association and of I Saloni Nautici: “Beauty and unmatched craftsmanship are Made in Italy, but the marine economy is still absent from the public debate: our country needs an industrial policy that enhances such an excellence that also produces wealth and jobs. Production has grown by 31%, reaching 6 billion 110 million in production value with 27 thousand direct employees. The number of people employed in production in 2021 has increased by 10%, and with the supply chain, it will reach 190 thousand: we are the sector that has grown the most. Shipbuilding exports are showing record numbers with 3.370 billion euros.”

Giovanni Toti, President of the Liguria Region: “Liguria is the yachting industry, just as much as the yachting industry is Liguria: if there is a Genoa model, it is the same as the Boat Show model, which has been able to grow since 2015, when my first term began, to date, overcoming internal divisions and standing as a candidate to become the number one Boat Show in the world, dominating the market. The course is set, and ours is first and foremost a commitment focused on cooperation between institutions and companies, and a mutual relationship built on trust. And that’s not all: the Region is excelling in three ways: the boom of tourists in Liguria, the export figures, and a record year for the yachting industry, all related to the sea, telling us that we are on the right track”.

Carlo Maria Ferro, President of the Italian Trade Agency: “Talking about exports helps us to see the future with more optimism: national exports in 2021 had already recovered 7.5 percentage points, above pre-pandemic levels, and the six months of this year have hit 22%. Breaking the data down, the boating industry was able to grow beyond the 2020 figures and in the six months of this year the sector grew faster than the national figures, twice as fast as in 2019. The Italian Trade Agency-Italian Marine Industry Association relationship has doubled down with support extending to start-ups and buyer relations. To export the boating industry means to export the best of all Italian production.”

Marco Fortis, Vice President of the Edison Foundation: “The economy has reacted to a complex period: in 2021 it was manufacturing that drove the recovery and today it is services that are driving the continuation of that recovery. With a GDP growth of 3.5 percent it is very likely that the third quarter will continue to give positive figures, while the unknowns are focused on the fourth quarter. The challenges lie in the energy and raw materials sectors, which are central to our supply chains. It will be crucial to maintain the competitiveness of the Italian manufacturing industry compared to other European countries. That of the yachting industry in particular, from which record export figures are coming in and which most of all combines our made in Italy capabilities: technology, design, innovation and excellence in terms of mechanics”.

Lorenzo Tavazzi, Ambrosetti Scenarios and Intelligence Office: “As part of the Liguria 2030 initiative, priority was given to the Region’s competitiveness together with the local institutions, focused on the PNRR and an exceptional reform path to talk about the future. We first looked at the potentially available resources already earmarked, i.e. EUR 7.13 billion for the region, a significant figure between now and 2026, and from here we looked at the potential activation of further investments. In the correlation between public and private investment, on average 1 euro invested generates 8, and if this multiplier were maintained the 7 billion would trigger 60 billion in private investment. Secondly, we surveyed the types by dividing them into investments that intervene on demand, critical issues and structural transformation with medium and long-term impact. The resulting number is an additional EUR 11 billion of investment, a figure that gives a sense of a system in the region that on average invests more in structural transformation”.

Marcello Minenna, General Manager of the Customs and Monopolies Agency: “One year after the 61st Genoa International Boat Show when the need for reliefs for shipbuilding and refitting activities emerged, we are back with more simplified rules and having eliminated what was considered a brake holding back the development of businesses and industrial capacity. The boating industry is growing step by step, tackling big issues with perseverance, and I believe that it is precisely on cooperation with the different operators at play and dialogue that the country’s revival can be based”.Genoa, 22nd September 2022