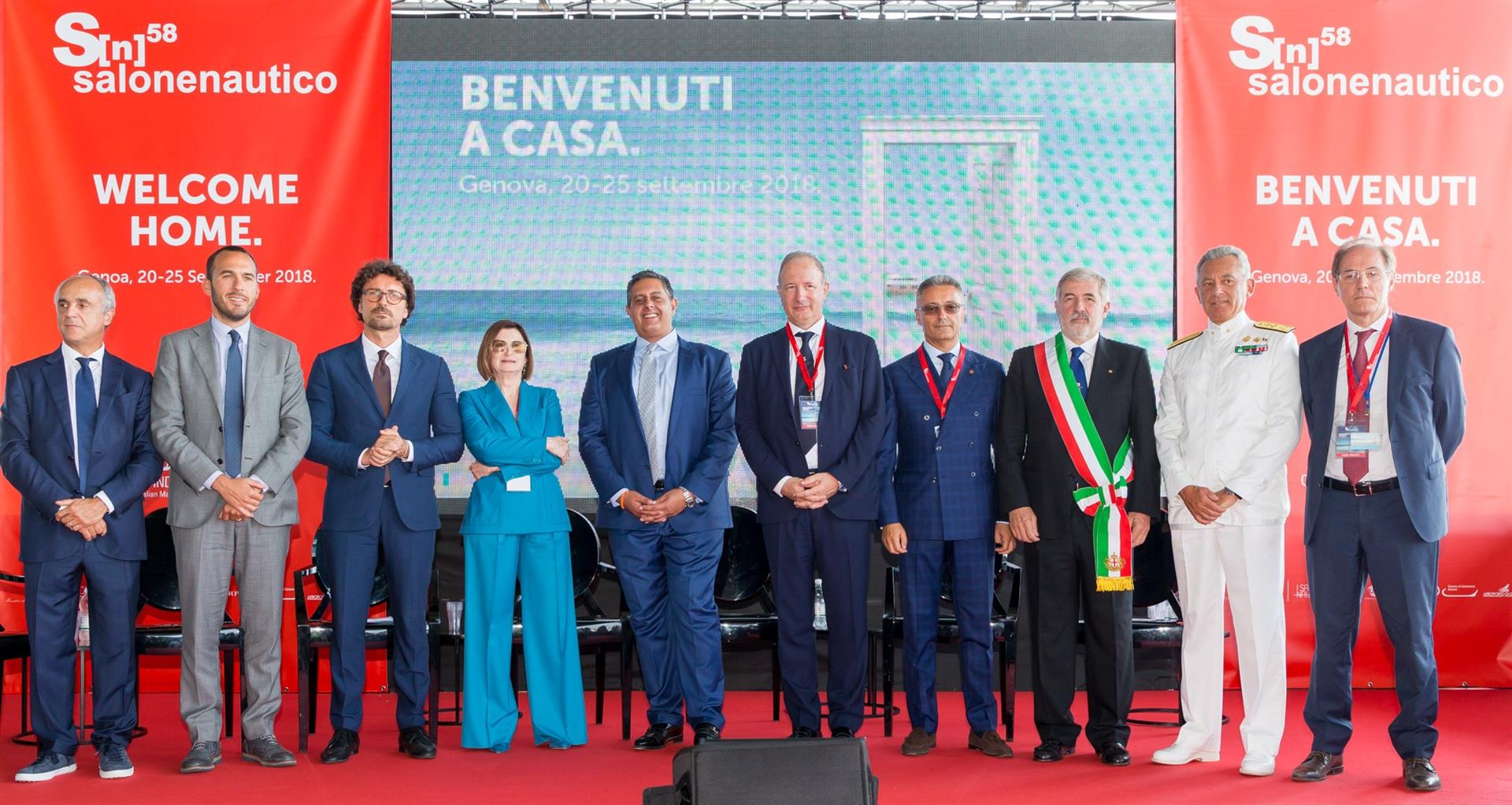 THE ITALIAN MINISTER FOR INFRASTRUCTURE AND TRANSPORT, DANILO TONINELLI, STATED: “THE DIGITAL REGISTER WILL BECOME OPERATIONAL IN OCTOBER”

CARLA DEMARIA, PRESIDENT OF UCINA, THE ITALIAN MARINE INDUSTRY ASSOCIATION: “THE INTERNATIONAL BOAT SHOW HAS BECOME A SYMBOL FOR REVIVAL, 951 EXHIBITORS BELIEVE IN THIS INTERNATIONAL SHOWCASE”

GIOVANNI TOTI, PRESIDENT OF THE REGION OF LIGURIA: “THE INTERNATIONAL BOAT SHOW SYMBOLISES THE COUNTRY WE WANT TO BUILD, CAPABLE OF FACING GLOBAL COMPETITION”

THE 2018 “NAUTICA IN CIFRE” (BOATING IN NUMBERS) DATA HAS BEEN REVEALED: OVERALL TURNOVER GROWS BY 12.8%

The 58th Genoa International Boat Show opened today, Thursday 20th September. A Boat Show joined by exhibitors right up to the last hours before opening, reaching a staggering amount of 951.
The opening ceremony began with the traditional flag-hoisting by the Italian Port Captaincy – Coast Guard, accompanied this year by a touching salute and sounding of the horn from the Guided-missile Frigate Virgilio Fasan (F 591) on behalf of the Italian Navy, paying homage to the International Boat Show and to the City of Genoa.
The civil authorities followed the initial displays by the military. Marco Bucci, Mayor of Genoa, gave an emotional speech, stating that, “today, with this International Boat Show, Genoa is showing the way forward when it comes to recovery.
The Boat Show could only take place in Genoa. It is the most beautiful boating event in Europe, championing Italy on a world stage”.
Admiral Giovanni Pettorino, Commander General of the Port Captaincy, saluted the International Boat Show and the city of Genoa, reminding the vast audience of dignitaries and international journalists that “Those who love the sea are never alone. Genoa needs to know that the whole Country is with them”.
Pierpaolo Signorini, President of the Port System Authority for the Western Ligurian Sea, explained the objectives behind relaunching Genoa’s waterfront, underlining the key role played by the Genoa International Boat Show and the will to support the project of an integrated hub within the new Darsena.
Following the greetings and speeches from the various authorities, an Opening conference took place, entitled “Global Champions. Boating and the Winning Country”, moderated by Antonio Macaluso, editor at the Corriere della Sera.
Opening remarks came from the Italian Minister for Infrastructure and Transport, Danilo Toninelli, who immediately focused on the support the Government intends to provide, stating that, “In October the Council of Ministers will make the digital register operational. Our objective – the Minister continued – is to simplify and consolidate rules aimed at giving value to the extraordinary skills at the heart of an industry as exceptional as that of Italian leisure boating, an industry I have now had the chance to experience personally”.
Carla Demaria, President of UCINA, the Italian Marine Industry Association, was next to speak: “The Genoa International Boat Show is an important showcase and an important tool for our industry. We are delighted to hear the wonderful news from the Minister with regards to approving the long-awaited Digital Register. I would like to thank everyone here today, especially the exhibitors who chose to confirm their faith in this International Boat Show and its importance worldwide, now a symbol of revival”.
The President of UCINA’s touching words were then followed by those transmitted remotely via a video of the President of the General Confederation of Italian Industry, Vincenzo Boccia: “Genoa plays a strategic role in the Country as a whole. This will be one of the most successful International Boat Shows ever to take place. A chance for beauty, excellence and technology to find their most effective showcase”.
Manlio Di Stefano, undersecretary to the Ministry for Foreign Affairs, underlined how leisure boating is the leading industry when it comes to export. Giovanni Toti, President of the Region of Liguria, continued by thanking “UCINA and all those who helped throughout these past months to relaunch the city. Today every one of us is Genovese, including every single person who entered the Genoa International Boat Show, because by doing so they have shown they want to be here. I believe that the boating industry should be an example for the entire Country. The example of what we want to build and of what is capable of truly competing on the world stage”.
“Here at the Genoa International Boat Show, I can see the ability to react” – emphasised Stefan Pan, Vice President of the General Confederation of Italian Industry and President of the Council of Regional Representatives. “Beauty and competence, when done in such a way, can conquer the world. These are the places where the true dignity and true excellence of this Country become a reality”.
Michele Scannavini brought his own experience to the conference as an entrepreneur and as the President of ITA, the Italian Trade Agency: “A great effort will be necessary in order to breathe life back into our competitiveness. The Genoa International Boat Show is a unique opportunity. This year we brought 150 delegates, international operators and journalists, to provide exhibitors here with real opportunities and to provide all the support they need to be globally competitive”.
Giovanni Del Vecchio, CEO of Giorgetti S.p.A., used his time to remind Italy of its “ability to be a beacon of excellence for the world. And today the Genoa International Boat Show reclaims its place as a beacon for Italian expertise”.

FIGURES FOR THE BOATING INDUSTRY REVEALED: DOUBLE-FIGURE GROWTH FOR THE THIRD YEAR RUNNING

During the Boating Economic Forecast conference, in front of a vast audience of authorities, journalists and operators, the Vice Minister for Infrastructure and Transport Edoardo Rixi, Prof. Marco Fortis, Vice President of the Edison Foundation, Carla Demaria, President of UCINA (the Italian Marine Industry Association), the President of Assilea (the Italian Leasing Association) Enrico Duranti, the Director of the General Confederation of Italian Industry’s Research Department Andrea Montanino, President of ICOMIA Andrea Razeto, President of EBI (European Boating Industry) Piero Formenti and Stefano Pagani Isnardi, manager of UCINA’s Market Research Department, spoke about the latest 2017 data as written in the same-named publication, data which is very positive for the Italian boating sector, while also analysing the future outlook for the industry. “An industry following a positive trend”, as was already stated by the UCINA President Carla Demaria during the Genoa International Boat Show’s presentation at the press conference held in Milan on 3rd September, “but which must remain vigilant in anticipating the typical changes such a global market has in store”.

In terms of numbers, the most significant information is that of the overall turnover in 2017 equal to 3.88 billion euros, with a 12.8% growth compared to 2016 (a turnover calculated exclusively with regards to activities which pertain to boating production within companies). Direct employment is also up (a total of 19,600 employees, +6.1% from 2016), as is the boating industry’s contribution to GDP (1.87%, 13.4% more than the previous year). Finally, as to confirm the overall positive trend of the sector, significant growth can be seen in the entire domestic boating industry, with an increase of 16.1%, reaching a total of 1.34 billion euros, and a specific increase in the domestic market for Italian leisure boat production of 29.2%.
Positive results, following the trend across recent years, for export as well, a sector which has allowed the national boating industry to react effectively to the recent crisis thanks to the excellence of Italian products, recognised worldwide, confirming Italy’s world leadership in the production of Superyachts (over 24 metres long); the spoils of these exports are particularly impressive, having registered a growth of 83.4% between 2010 and 2017.