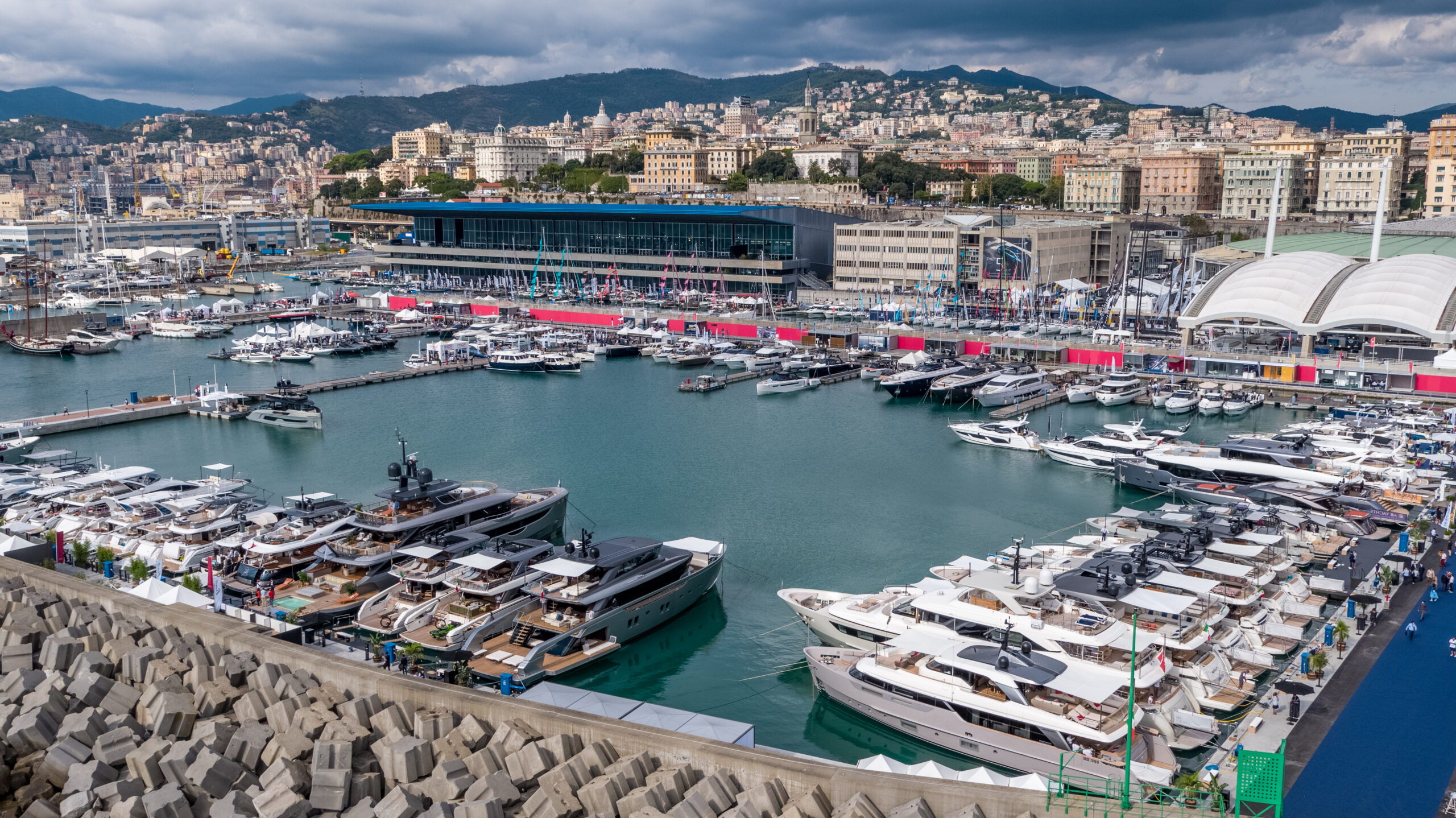 The Ligurian capital will once again be hosting the Genoa International Boat Show from 16th to 21st September, organised by Confindustria Nautica – the Italian Marine Industry Association, an essential strategic tool for supporting and developing businesses operating across the yachting industry, now set to inaugurate its 61st edition.

This year will also see the important partnership and key synergy between the Genoa International Boat Show, the city of Genoa itself and the local territory, all focused on making the six days of the trade fair worthy of an event dedicated to the very best the leisure yachting industry has to offer, working together towards a bright future built on a clear vision and insight.

Andrea Razeto, Vice President of the Italian Marine Industry Association – Confindustria Nautica: “Every year this city demonstrates again and again its awareness of just how much potential the boating industry has, the opportunities this sector can develop and put into action. Those of us who operate in this world, who have always lived and breathed the industry and who are fully aware of how much work is needed to make such an event possible, have always known that the Genoa Boat Show has the unique ability to bring Genoa even closer to the sea, to allow the world to experience the sea like nowhere else, to offer a 360o view of the industry and of its true potential. Today the city is well aware of the positive impact the International Boat Show and the industry can have, in terms of how much value and resources they bring to the surrounding region, both with regards to tourism and industry, developing and promoting the city as a whole. Genoa is a city capable of attracting investment from throughout Italy and abroad. The synergetic relationship that lies at the heart of these local territories is summarised perfectly in an International Boat Show inspired by a fundamental principle of cooperation, engaging operators from across the industry and local businesses. We are thrilled to see how many applications to take part in the Genoa Boat Show have been received and how many tickets have already been reserved, this year we will reap the rewards of last year’s successful performance, being the only industry event in Europe and one of only two Shows worldwide to take place: we are now ready to capitalise on all the hard work put in up to this point.”

Marco Bucci, Mayor of Genoa: “Genoa is ready to once again become the star of the yachting world, thanks to the International Boat Show. An edition this year destined to be meaningful, taking place in person, one where we will be given the opportunity to discover and rediscover the close relationship that ties our city to the sea and to our boating economy. As always, we could never have achieved as much without the key partnership between all sides involved who have once again worked incessantly in order to make sure this International Boat Show is the usual absolutely unmissable event for industry enthusiasts, professionals and more.

The entire city will be involved, including the presence of collateral events. And let’s not forget that the same location where the Genoa International Boat Show always takes place is receiving copious investment to redevelop the area embracing a new vision of Genoa’s future. Once the reimagined Levante Waterfront will be completed in 2023, the Genoa Boat Show will be unmatched worldwide. This year, however, the event will be as large as ever with shipyards rushing to claim their spot in another highly successful event that has already been sold out for months”.

Luigi Attanasio President of Genoa’s Chamber of Commerce: “The Chamber of Commerce is pleased to renew its support for the Genoa International Boat Show’s Hospitality Project, aimed at ensuring safe, socially-distanced transport for visitors and exhibitors onboard shuttle services that will connect hotels, stations and airports to the Boat Show, along with a ferry system between the trade fair and Porto Antico. A new addition to this year’s edition will be an exhibition dedicated to precious creations that adorned the transatlantic ships of the Italian fleet, also including two historic tapestries in the Sala delle Grida inside the Palazzo della Borsa, generously provided by Cassa Depositi e Prestiti and surrounded by photographs from the Archivio Leoni, arranged to tell the story of the great season of the two transatlantic stars, the Michelangelo and the Raffaello. The theme of Made in Italy beauty will also act as the inspiration for the stand, shared with the Liguria Regional authorities, and for a video that will be played on the magnificent big screen at the entrance to the Boat Show.”

Matteo Campora, Genoa Local Council Member for Transport, Integrated Mobility, the Environment, Waste and Energy, and delegated member for the ecological transition of the Municipality of Genoa:“The leisure boating industry is among the highest spending sectors in terms of investment in research and development– stated Matteo Campora, Council Member for the Environment – aimed at adopting innovative technological solutions to achieve a greater level of environmental sustainability. This year’s edition of the Genoa International Boat Show will be the perfect opportunity to show the world what the businesses across this sector are doing to face the fundamental challenges of  both today and tomorrow in terms of ecological transition, decarbonisation and climate neutrality. Visitors to the Genoa Boat Show, who by admiring the latest boats on display with their own eyes and by taking part in the panels dedicated to sustainable boating, will realise just how much the world of maritime transport is evolving to guarantee and promote a greater amount of respect for the sea and its coastlines: key resources that need to be safeguarded and improved through the use of less polluting fuels and circular economy-focused solutions, aimed at developing a more sustainable and more green boating industry. This commitment is carried out in parallel by the Municipality of Genoa through the Genoa Blue District – an initiative of fundamental importance tied to promoting a Blue Economy – and large-scale events such as The Ocean Race Europe which took place last June, where a number of smaller zero-emission boats were introduced to the world: a practical demonstration of how much still can and needs to be done in view of a more sustainable boating industry.”

Paola Bordilli Genoa Local Council Member for Large Events, Commerce and Craftsmanship: “The Genoa International Boat Show is a fixed calendar event for the city and its Genovesi, an event that, over the past few years, has shone the international spotlight on Genoa as a world-class showcase for the boating industry, a strategic sector not just in terms of promoting the local territories but supporting the local economy in general. Ticket sales are an excellent sign for this year’s edition of the Genoa International Boat Show’s success, marking a clear recovery after a year of uncertainty tied to the pandemic. Genoa is getting ready to host a great number of visitors. Despite the various rules imposed to keep the public as safe as possible, we are greatly looking forward to welcoming the Boat Show to our shores, showing off the best of Genoa to the world, especially with key features such as sustainable transport in order to allow visitors to get to know the city and experience the best it has to offer after their day at the international trade fair.”

Pietro Piciocchi,Genoa Local Council Member for Public Construction and Budgeting: “We are working around the clock to make the incredible Waterfront project a reality, a revolutionary project that is charging ahead at full speed and well within schedule, aimed at giving back to the citizens of Genoa an area that overlooks the sea and at creating a district that fully represents Genoa’s role as the world capital of yachting. The new Levante Waterfront, which will also host the Genoa International Boat Show, is an urban redevelopment scheme conceived to be entirely unique on a national scale, an ambitious challenge that will represent the success that derives from perfect synergy between the public and private sectors, aiming to champion the maritime soul of this city. The Genoa International Boat Show is the most important event of the calendar and next year the world-class trade fair will be able to count on even more spaces, canals and ports that will create an even better experience for exhibitors. Thanks to the innate synergy with the Italian Marine Industry Association, the Genoa Boat Show will be able to grow, edition after edition, offering visitors and the city itself a chance to develop not just during the event but permanently throughout the year”.