THE FIRST DAY OF THE 60TH GENOA INTERNATIONAL BOAT SHOW 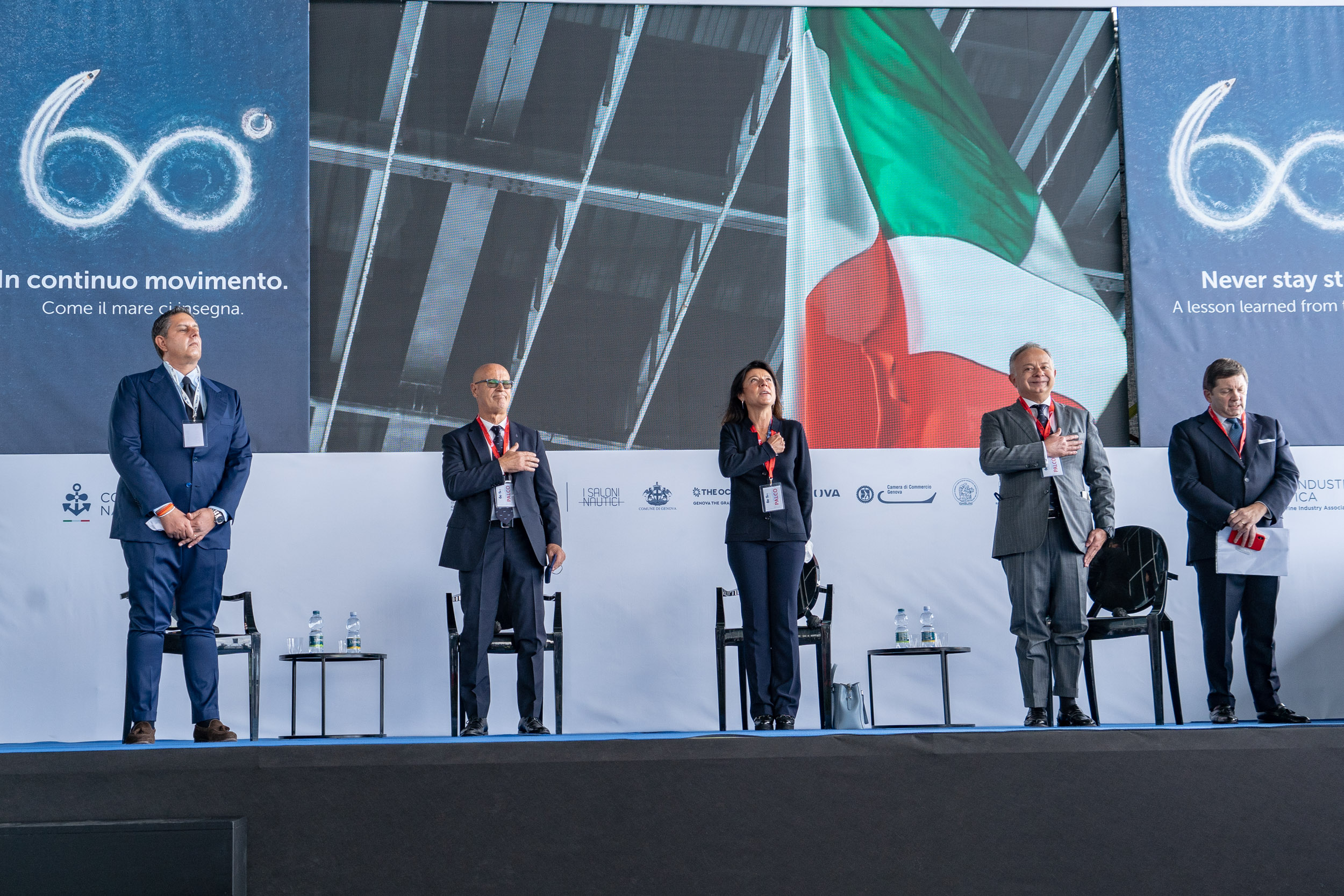 DE MICHELI: WE WILL DO WHAT WE MUST TO STRENGTHEN THE MARINE ECONOMY OF WHICH YACHTING IS A KEY ELEMENT

BUCCI: THE SHOW, LIKE GENOA, HAS NEVER STOPPED. WE HAVE TO WORK HARD TO HELP OUR CITY GROW

CECCHI: THIS IS AN EDITION INSPIRED BY COURAGE, THE EYES OF THE WORLD ARE ON GENOA TODAY, THE CAPITAL OF YACHTING AND A SYMBOL OF THE WILL TO RESTART

FERRO: OUR ROLE IS TO BRING THE COUNTRY TOGETHER TO FACE THESE TRYING TIMES, SOMETHING OF WHICH THE YACHTING INDUSTRY IS A SHINING EXAMPLE

Today, Thursday 1st October, the 60th Genoa International Boat was inaugurated in the Ligurian capital,  a milestone for the entire yachting industry, for the region and for a country that wants to get back on its feet.

The inaugural ceremony was opened with the traditional flag-raising and salute on behalf of the Italian Coast Guard and Ports Authority.

The first international event in Italy and the only boat show in Europe in the age of Covid, Genoa was saluted today by the members of the Government and local authorities.

Mayor of Genoa, Marco Bucci: “My warmest greetings to the exhibitors at the 60th Genoa International Boat Show, which has never stopped, not even this time. Like Genoa, even in an era of difficult challenges. I would like to thank everyone who came together to realise a global symbol of teamwork. We asked 5 billion euros in recovery funds for the growth of our city. We want to retake our place as a central city in Italy and in the world”.

Mauro Alfonso, Simest CEO continued: “This sector has shown greater resilience than other sectors and for this reason SIMEST with SACE pledge their full support ” .

Paolo Emilio Signorini , President of the Port Authorities of the West Ligurian Sea System: “The Eastern part of the port of Genoa,  a place dedicated to yachting, is now being relaunched” . Mauro Ferrando , President of Porto Antico SpA: “what we are inaugurating today is an event that is good for everyone. Something that makes it possible to return to normal. The annual event returns to its usual implementation. The contract that Porto Antico signed with I Saloni Nautici laid the foundations for the next 10 years of the Genoa Boat Show, organized by the Italian Marine Industry in synergy with Porto Antico ” .

Greetings on behalf of the authorities were followed by the inaugural conference “60 years of Yachting, a bridge to the future” moderated by Andrea Pancani , deputy director of TG La7 .

The Minister of Infrastructure and Transport , Paola De Micheli , representing the Italian government underlined how: “Covid has changed our priorities. Today is less about numbers, it’s about how dedication and pride have overcome fear. This event is an example. I thank the Italian Marine Industry Association and exhibitors for having faith and having done their part when it came to participation and protocols. The government believes in the strategic importance of Genoa and is committed to empowering the marine economies. The objectives from 1st January: marine infrastructure and environmental sustainability supported by economic sustainability. For the industry an important issue is that of social boating, something we are pursuing by demolishing costs of smaller boats: a goal that will have an immediate effect on nautical tourism and in turn on the whole production chain, bringing people closer to marine activities” .

“This is an edition inspired by courage, the eyes of the world are on Genoa today – stated Saverio Cecchi, President of the Italian Marine Industry Association-. Genoa today becomes the capital of European and global boating. The best of Italian know-how can be seen in the Ponte San Giorgio and, today, with the first international Boat Show to take place. I thank the members and exhibitors, who chose to invest in the Boat Show, we owed it all to them. We moved the dates of the event to October, which allowed us to prepare and submit our protocols to the Technical Scientific Committee and have the opportunity to achieve what we set out to achieve. It was an immense team effort. I would also like to thank Carlo Maria Ferro, President of the Italian Trade Agency, Region President Toti, Mayor Bucci and all those who made it possible. I am excited and proud, the Genoa International Boat Show is the Italian Marine Industry Association” .

The President of the industry’s association then added: “Nautical leasing is one of the issues that still needs intervention. Existing contracts will be managed by the old rules and from 1st November new rules will take effect. We are working with the Italian Revenue Agency, our technicians are working with theirs, to resolve the outstanding issues. As a leading sector we ask to be able to compete on equal footing with other European countries. If something doesn’t change soon the country will lose 72 billion in revenue in favour of other countries: ever more  boats will be registered as ‘foreign’.

The iconic value of this Boat Show was highlighted by Giovanni Toti , President of the Liguria Region, “Just like in 2018, after the tragedy of the Morandi bridge, we are facing a new adventure, which starts from the sea. The 60th International Boat Show this year coincides with the 50th anniversary of the birth of the Liguria Region, two realities that have grown in parallel”.

The Boat Show also kept going in terms of international promotion, through global marketing campaigns included in the Ministry of Foreign Affairs and International Cooperation’s Made in Italy Promotion Plan, implemented by the Italian Trade Agency.

With regards to this, Carlo Maria Ferro, President of the Italian Trade Agency, stated: “success is a team effort. A system of alliances between public and private: companies, institutions and service operators such as the Italian Trade Agency, all focused on ensuring Italian businesses can grow within global markets. Just like we’ve been doing with the Italian Marine Industry Association and the trade fairs system to relaunch ten fairs over the past weeks, including the International Boat Show, which has been successfully inaugurated this morning. Happy 60th birthday to the Genoa Boat Show!”

The end of the inaugural day ended with the visit of the President of the General Confederation of Italian Industry, Carlo Bonomi. “I can imagine the unprecedented amount of effort and responsibility that went into opening today, a responsibility taken on months earlier when there was still no sign of any rules. This is a great achievement. ” – he told the Italian Marine Industry Association Board – “This is something that must be said ” .