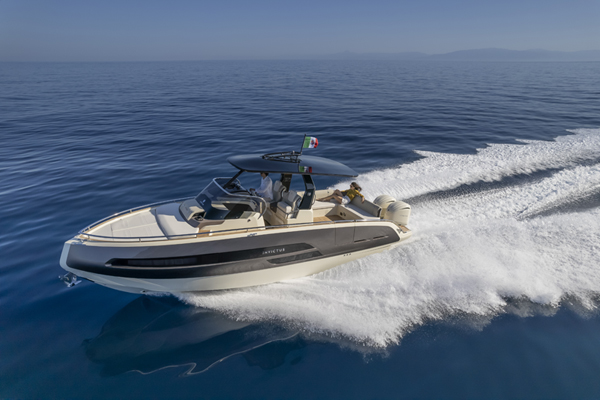 Invictus Yacht, after introducing the GT280S, TT280S and GT370S, will be presenting the outboard version of the GT320S, the fourth outboard model of one of the shipyard’s most successful ranges, at the 62nd Genoa International Boat Show.

The outboard configuration of the GT320S (9.93 metres long by 3.03 metres wide) allowed Invictus Yacht designer Christian Grande to organise the deck spaces in an entirely new way. Once the engine compartment disappeared, it was in fact possible to create a large living area.

The GT320S, which can carry up to 12 people, is available with a protective bimini for the dashboard and cockpit but can be equipped with a carbon hard top featuring integrated lighting elements.

The interiors, with long windows, are organised with a double aft cabin and a convertible dinette. A bathroom completes the setting. There are ample possibilities for external and internal customisation, even with the tailored assistance of Atelier Invictus.

The predicted power set-up will include two Yamaha 300 Hp engines however it is possible to reach 900 Hp in total.