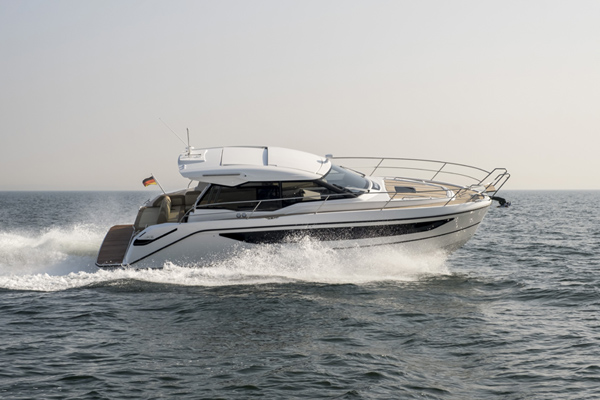 Signed by Italian designer Marco Casali from the Too Design studio, the Bavaria SR36 will join M3 Servizi Nautici for its debut at the 62nd Genoa International Boat Show.

The Bavaria SR36, 11.68 metres long by 3.89, is available in two versions: the Open Top (with a low windshield) and the Hard Top with the possibility of adding the closing doors from the Open version in order to create a Coupé.

At the stern is a large platform with an equally large sundeck along with one located to bow which can be accessed via large gangways.

The cockpit is furnished with a dinette with a modular table and a kitchen while the helm station to starboard is flanked by a sofa for two.

The owner’s cabin is amidship and stretches across the full beam including a sofa. The second double cabin can be separated from the living room with a door or kept as an open space. A bathroom with separate shower and a kitchen equipped with a sink complete the interior layout. The model runs on a Volvo Penta or Mercruiser engine with stern drives.