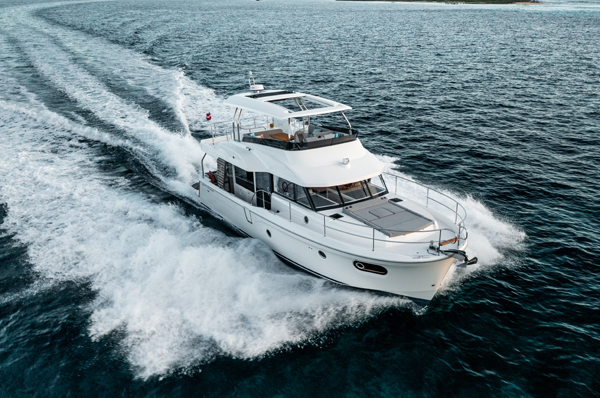 Beneteau’s Swift Trawler range dedicated to cruising has been joined by a new model that the French shipyard is presenting at the 62nd Genoa International Boat Show. It is the Swift Trawler 48, a 15 metres (14.74 m) by 4.50 metres wide model that sleeps eight guests and can carry 12 people.

Featuring a semi-planing hull conceived by MICAD, the Swift Trawler 48 was designed by the Andreani Design studio and everything on board was defined to offer the highest standards of comfort, even for long voyages.

The cockpit is furnished with a sofa served by a folding table and is protected by the wing of the flybridge which with its 20 square meters houses the second helm station, sofas, dining area and bar.

On the main deck, through the single starboard gangway, you come to a large sundeck. The interior living room has a dining area that can be converted into a double berth, kitchen and wheelhouse. On the lower deck there are three cabins, with the owner’s cabin in the bow, VIP and a double. Engine set-up: two 380 Hp or 425 Hp Cummins.