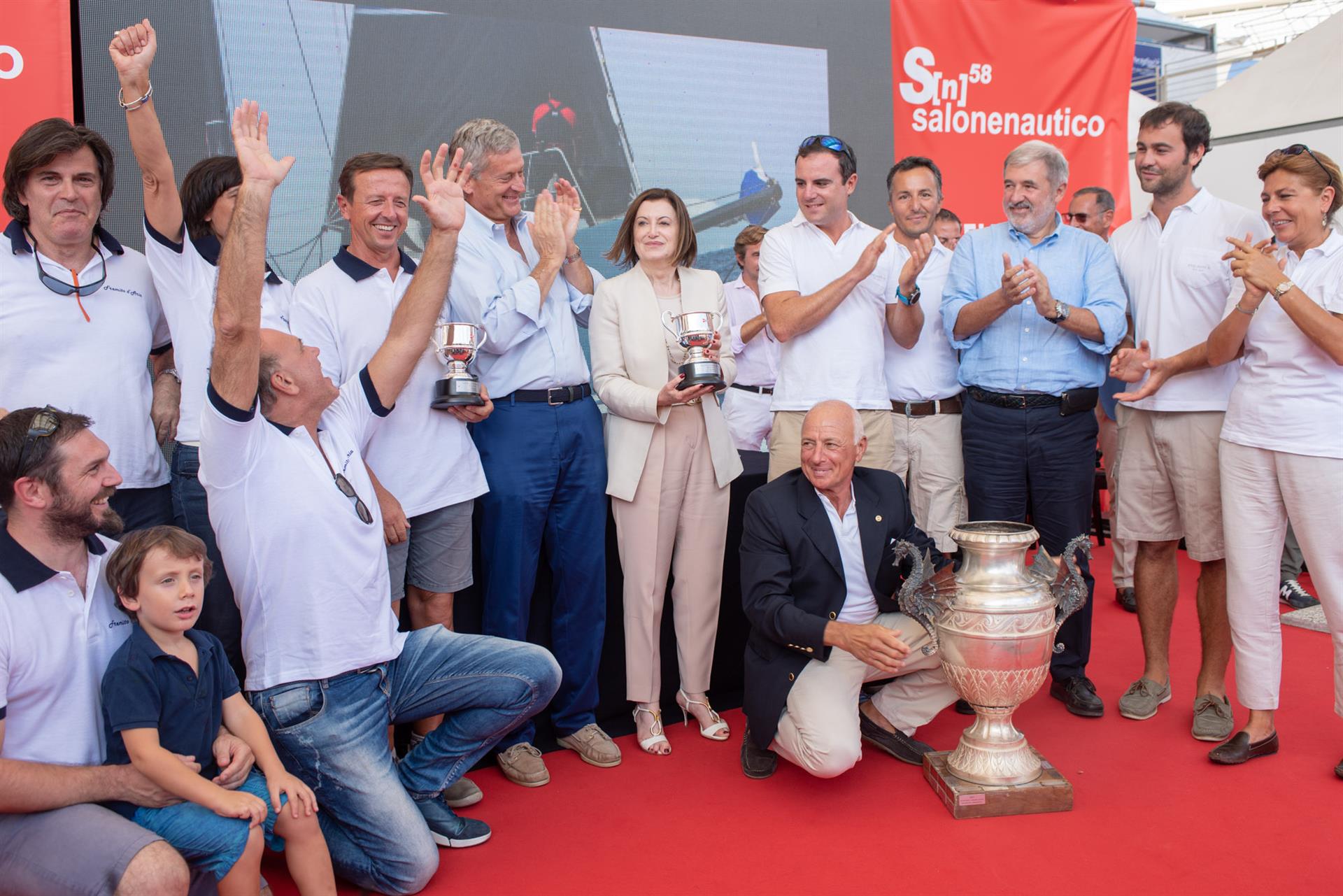 SAILING TOOK OVER THE MORNING’S EVENTS: ITALY SAILING AROUND THE WORLD AND GENOA’S CANDIDACY FOR BECOMING A STOP-OVER CITY FOR THE ROUND THE WORLD RACE

2018 MILLEVELE CREWS AWARDED: ATLANTA II WINS WITH THE PRESIDENT OF THE REGION OF LIGURIA TOTI, VICE MINISTER RIXI AND MAYOR OF GENOA BUCCI ONBOARD

Day 4 of the 58th Genoa International Boat Show opened with Genoa’s candidacy for becoming a stop-over city for the next edition of the upcoming round the world regatta in 2021. “For me, to have a stop-over in Genoa while sailing around the world would be a dream. Genoa is my second home. The city offers the skills, experience and, most importantly, passion for the sea, making it the ideal location for an incredible stop-over”.

The words of Richard Brisius, president of Atlantic Ocean Racing, the company which organises the race around the world, during the presentation of Genoa’s candidacy launched by the company Porto Antico di Genova: “We have decided to launch this candidacy – explained the president Giorgio Mosci – “because we believe it could be an enormous opportunity not just for the race itself but for the city as well”.
“Three years ago,” – commented Alessandro Campagna, commercial director of the International Boat Show – “the Genoa International Boat Show hosted the crews during their race around the world. The International Boat Show is a home for all sea lovers and what better way to represent such passion than a regatta circumnavigating the globe. UCINA (the Italian Marine Industry Association) will support a stop-over in Genoa with all the resources at its disposal”.
Taking part in the conference was also Francesca Clapcich, Italy’s first female sailor to take part in the race around the world during the last edition in 2017-2018, who was able to chime in via audio feed to underline the importance of female participation onboard boats sailing in the global regatta.
“I believe that Francesca Clapcich’s experience sailing around the world” added Francesco Ettorre, president of the Italian Sailing Federation, “bears the potential to open up new horizons of public interest and inspire young athletes who compete in other sailing disciplines. When I first heard about Genoa’s candidacy to become a stop-over location for the round the world race, I immediately thought it could be the perfect opportunity to talk about a side of sailing that fascinates everyone”.
Also at the Teatro del Mare was Alberto Bolzan, two-time round the world regatta sailor. “A stop-over in Genoa would be fantastic. If an Italian boat were to be competing it would be perfect”.
The selection process for the stop-over locations for the next edition of the race around the world begins in October this year and ends in June 2019.

Sailing and Genoa were also at the heart of the second event where awards were given to crews who took part in the 2018 Millevele regatta, Genoa’s flagship regatta, organised by the Italian Yacht Club with the support of Iren and Slam. Success after success this year with 200 boats setting sail and over 10,000 euros collected for projects aimed at helping families struck by the recent fatal collapse of the Morandi bridge. Real-time winner was Atalanta II, with a particularly exceptional crew: the President of the Region of Liguria Giovanni Toti, the Italian Vice Minister for Infrastructure and Transport Edoardo Rixi and the Mayor of Genoa Marco Bucci. Awards were also handed out to the respective categories: green group 1: Atalanta II; green group 2: Alebi; green group 3: Voloira IV; yellow group 4: Fremito d’Arja; yellow group 5: Tekno; yellow group 6: Caim2.

Nicolò Reggio, President of the Italian Yacht Club: “It was the right decision to bring the Millevele regatta back to the Genoa International Boat Show where it started 30 years ago following the wishes of Giovanni Novi. It was a beautiful day at sea for the boats on display at the boat show to be seen alongside those sailing at sea”.