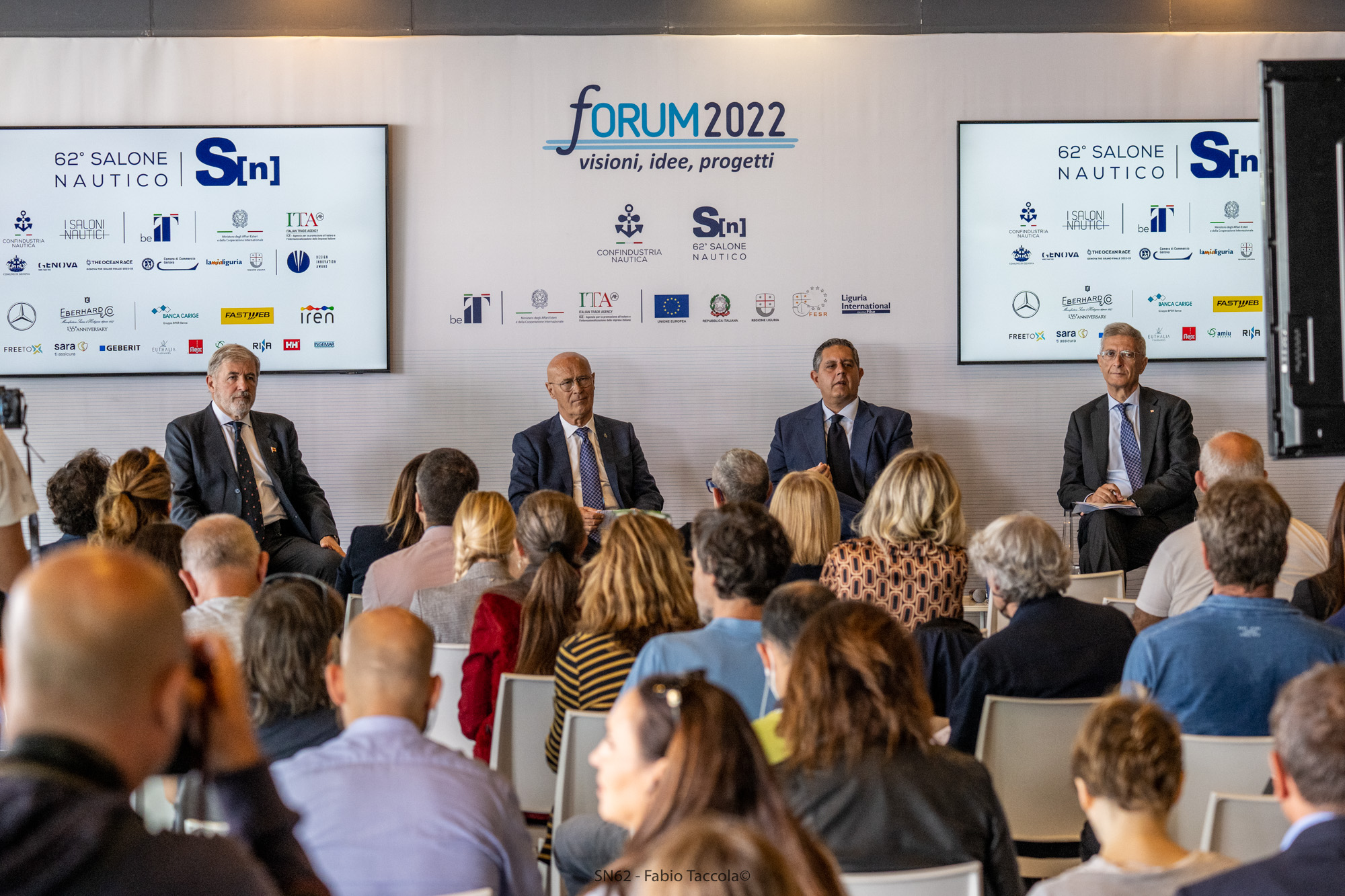 MARCO BUCCI, MAYOR OF GENOA: “GENOA IS AN ENGAGING AND WELCOMING CITY WITH EVENTS SURROUNDING THE BOAT SHOW“.

GIOVANNI TOTI, PRESIDENT OF THE REGION OF LIGURIA: “THE GENOA BOAT SHOW AND NEW WATERFRONT ARE THE DREAM OF A BETTER CITY BECOMING A REALITY“.

Today at 12.00 pm, the Closing Press Conference of the 62nd Genoa International Boat Show, an event organised by the Italian Marine Industry Association and I Saloni Nautici from 22nd to 27th September and an edition that has made the most of the tremendous amount of work carried out by the Association over the last few years.

These were the closing statements.

Saverio Cecchi, President of the Italian Marine Industry Association and I Saloni Nautici: “This has been not only an incredible Boat Show, but above all an efficient one: in an exceptional moment for the yachting industry, having grown by 31.1%, with a turnover of € 6.1 billion and a workforce growing by 9.7%, visitors have increased by 10.7% since last year to an impressive 103,812 (as recorded at 11.00 am this morning), and all contracts have been closed. Teamwork was key because this is what we are. All of us. The entire Italian Marine Industry Association, the Genoa International Boat Shows, the Regional Council of Liguria, the Genoa City Council, and the Genoa Chamber of Commerce. A team that as of tomorrow will be planning the 2023 edition of this incredible Boat Show, scheduled to take place from 21st to 26th September next year, an edition that has to be more than just a good show, it has to be the best”.

Genoa Chamber of Commerce Secretary General Maurizio Caviglia: “Speaking for the city and the Chamber of Commerce, we are aware of the huge organisational efforts put in place for the Genoa International Boat Show. Despite the fact that we are in one of the largest redevelopment sites in Italy, we have succeeded in ensuring, from all of the various players involved, a synergic contribution to relaunching Genoa across all of its sectors. And the intense promotion of Genoa and its territory will also continue during the many legs of The Ocean Race as the round-the-world regatta follows its route from continent to continent, to relaunching us as a tourist destination and attracting new events.”

The Mayor of Genoa, Marco Bucci, had this to say: “The results have exceeded all expectations and, in addition to the success achieved in terms of the public and businesses, the city has been able to open up and function as a place of high-quality hospitality and entertainment. The next step will be in June 2023 when, on the new Eastern Waterfront which is currently taking shape, Genoa will be the final stage of The Ocean Race. This is a sport in which there is always a finish line: for us, the one shared with the Italian Marine Industry Association and the Saloni Nautici will be the new ten-year agreement starting in 2024, which will include all new exhibition areas. The idea is to transform ideas into real goals“.

The President of the Liguria Regional Council, Mr Giovanni Toti: “What makes me proud today is not only the number of visitors who came to enjoy the Genoa Boat Show but the rate of growth recorded for employment throughout the entire industry. This is an economy that works, an economy that makes dreams come true, and the Genoa International Boat Show is its focal point. Just like the new Eastern Waterfront, Italy’s largest urban regeneration site, the Show is the dream of a better city becoming a reality.”

The 62nd Genoa International Boat Show was supported by the Italian Trade Agency, who, alongside the Italian Marine Industry Association, organised the presence at the Boat Show of a delegation of international journalists and foreign buyers from 35 countries and 5 continents with the international press and buyers tour included in the Made in Italy Promotion Plan of the Italian Ministry for Foreign Affairs and International Cooperation.

In terms of communications, 1117 journalists were accredited, 644 articles were published during the Genoa Boat Show alone, from 22nd to 27th September, 154 of which in daily newspapers, and 11 hours of TV reports dedicated to the Show.

Record-breaking numbers were also achieved by the official online Genoa International Boat Show TV station, which, available at https://sntv.salonenautico.com/, on the Sole 24 Ore official website and on the Corriere.it website, streamed live events daily, along with interviews and reports on conferences, products, and brand new designs on display. There were 1,188,000 page views on the institutional website, 230,000 users connected, and over 1,766,868 people reached via the official social media channels over the 1st – 26th September period.