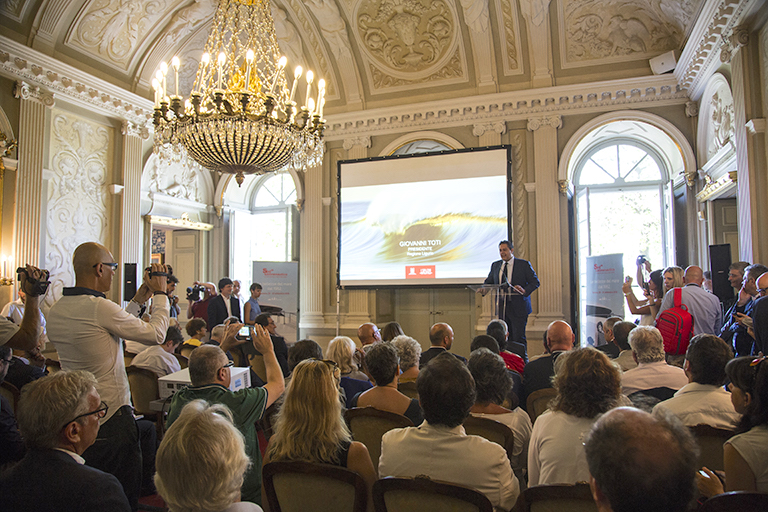 The 56th edition of the Genoa Boat Show – scheduled for September 20-25 – was presented this morning in Genoa in the presence of Carla Demaria, President UCINA Confindustria Nautica, Giovanni Toti, President of the Liguria Region, Carla Sibilla, councillor for culture and tourism of the municipality of Genoa and Paolo Odone, president of the Genoa Chamber of Commerce. Also speaking were Marina Stella, Director General of UCINA, and Alessandro Campagna, Sales Director of the Genoa Boat Show.

“The Genoa Boat Show – said Carla Demaria, President of UCINA – is the instrument the sector needs today. It is the most representative of all with a history of 56 editions. It’s an extraordinary heritage to protect. The presence today of the Institutions is all the more important because we need concrete support.”

The Institutions gave a unanimous response, starting with Liguria Region President Giovanni Toti who confirmed support for the Genoa show: “The institutions have never adopted such a systematic approach. The Genoa Boat Show must not be touched, it is a heritage we cannot lose, above all a time when there are clear signs of an upturn in the sector. The Institutions will do all that is needed to make the Show grow. We are working to create a private Newco as a guarantee for everybody that will drive for improvement and innovation. Making the Show grow is in everybody’s interests to make the economy of this country grow and I hope some of the criticisms I have read in the papers are due to a touch of the sun.”

The next speaker was Paolo Odone, president of the Genoa Chamber of Commerce, who underlined that the city was ready and willing to continue to host and support the Show. This was also confirmed by Carla Sibilla, councillor for culture and tourism of the municipality of Genoa, who said: “The city will welcome the Boat Show with a full programme of events and initiatives and is willing to evaluate anything it can do to develop its nautical vocation.”

The 56th Genoa Boat Show will be an important addition for three reasons: because it drives development for the sector, because it is a leading event in international yachting and because it is a resource for the territory.

Recent data on the yachting market show an inversion of the trend and speak of a solid event that has held up despite the sector having gone through its worst ever crisis.

Data show the Italian yachting industry grew 12% in 2015 and growth of 7.5% is expected for the 2016 sailing year. Signs from the accessories and engine sector (outboard engine sales in the past two years have grown 40%) are encouraging and will boost the entire boatbuilding sector. This is demonstrated by the fact that the space for outboards at the Show was already sold out in June.

“Together with the Show – said Carla Demaria –UCINA too has grown. In recent months 20 new members have joined the Association, including Rossi Navi, Canados, the historic brand Tornado which is back in the market and the Association, together with 15 new members from the refitting, services and ports sectors. This means there is a greater desire to take part in the life of the sector.”

The difference in the atmosphere this year is shown not just by market data but also by entries in the 56th edition of the Show: they continue to increase, +21% compared with the same date last year, both in terms of exhibitors and the range on show, with 57% of exhibitors increasing their investment. We are proud to underlined the return of important names, and unequivocal symptom of faith in the potential of yachting. Among others, we will also see in Genoa: Princess Yachts, Canados, Chantiers Amel, Fjord, Gagliotta, Innovazione e Progetti, Najad, Rodman, Sealine, 3B Craft, Tornado Yachts, Cantiere Cranchi.

The positive trend speaks of a market that is on the move and of a product – the Genoa Boat Show – that confirms it is a point of reference for the entire sector: just think that every euro invested in the Genoa Boat Show generates €10 in the territory (source Osservatorio Fiere di Cermes – Bocconi).

Excellent results were presented by the sales director of the Boat Show, Alessandro Campagna. Thanks to the return of overseas yards but also to the increased investments by exhibitors, the sailing yacht sector grows by 5% and the average length of boats by 19%. There was an excellent result from the catamaran sector with increasing representation at the Show, confirming the market is expanding.

Growth was confirmed too by inboard motor yachts: the number of boats is up 12% and their average length up by 16%. The spaces for outboard engines are completely sold out with many previews of new engines, including those from Suzuki and Mercury.

The accessories and components sector also confirms the trend, thanks also to the “incoming” project implemented with the support of the Ministry for Economic Development and Agenzia ICE, which will bring to the Show 140 international specialist journalists and operators, and also the heads of design and purchasing offices of boatbuilders, buyers, international distributors and brokers. Present for the first time in Italy is an important delegation of 15 independent brokers from the Florida Yacht Broker Association, a historical American association with more than 1200 members from the yacht brokerage sector of one of the most dynamic markets in the world.

“An increasingly international Show – said Marina Stella, Director General of UCINA Confindustria Nautica – that confirms its role as a window on the world. A great commitment to internationalisation supported by MISE and ICE Agenzia that involved 32 ICE offices worldwide.”

It will be a Show full of content, opportunities, real experiences and fun with 120 events already scheduled and a special look towards the future. The 56th edition of the Show will in fact be dedicated to paying homage to Olympic Italy and supporting the candidacy of Rome 2024. A concrete and ambitious candidacy that offers the entire Italian system a unique opportunity in terms of image and, at the same time, an important boost to growth for the entire country. Genoa, for example, is one of the 11 cities chosen to host the Olympic soccer tournament if the candidacy is successful.

“We are proud to host at the Boat Show the athletes who will have taken “made in Italy” on to the podium of the Rio de Janeiro Olympics and to help support the candidacy of Rome 2024, which is a challenge for the entire country – said Carla Demaria. “We too want to play our part. So it is with pride that today we present to you the 2016 Show.” 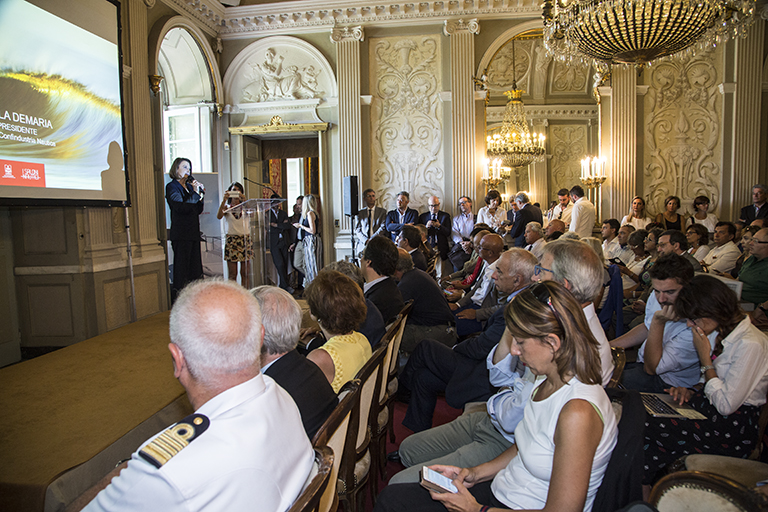