MANY ARE THE ROADS THAT LEAD TO GENOA 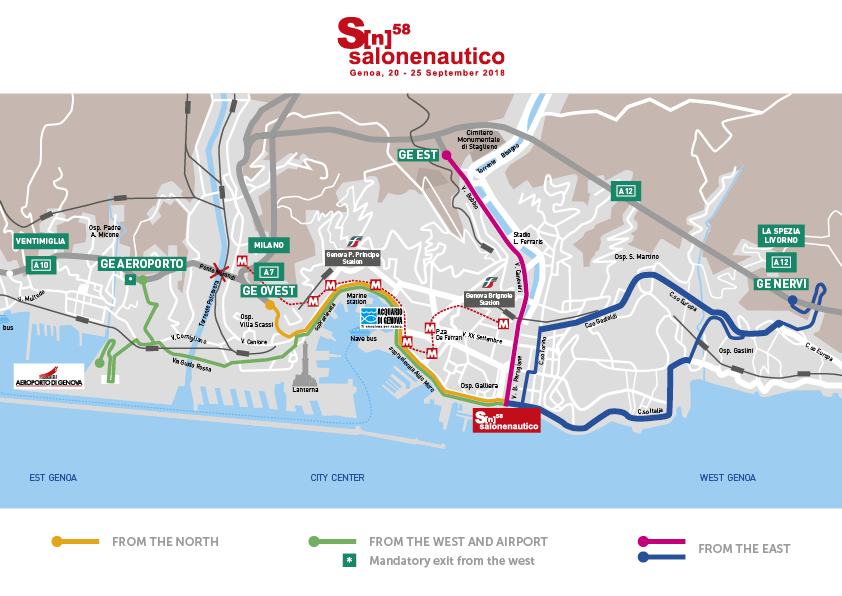 By car, train, plane or sea: the city of Genoa remains open and eager to welcome you to the upcoming 58th edition of the International Boat Show (20th – 25th September)

Due to the recent tragic collapse of the Morandi bridge, roads in the Western parts of Genoa and routes for travelling to the city from the Western “ponente” coastline have been reviewed and changed accordingly. Each solution has been devised by a series of permanent think tanks who, following the recent tragedy, immediately put forward effective measures to make alternative routing plans as smooth as possible. Traffic is being monitored 24 hours a day in view of any further optimisation.

If you are arriving from the West by car (France – Ventimiglia – Savona):

If you are travelling from the Western “ponente” coastline, you will have to exit the A10 motorway at the “Genova Aeroporto” junction and follow a detour along an urban route through Via Manara, Via Hermada, Via Albareto, Via Siffredi connecting you to the new six-lane Guido Rossa coastal road. The completion of this road is already well underway. Work on the road has now been accelerated and four of the six lanes are already available, which will, in turn, take you straight to the port, the raised Aldo Moro road and/or the “Genova Ovest” motorway junction, allowing you to continue on the A7 towards Milan and North of Italy and on the A12 towards La Spezia, Livorno, Florence and Rome.

If you are arriving from the North (Milan) by car:

No changes at all to the usual route for those arriving at Genoa from the North (Milan): you will exit the A7 motorway at “Genova Ovest” which will give you direct access to the raised Aldo Moro road in order to reach the “Piazzale Kennedy” area, the traditional reference point for visitors coming to see the International Boat Show.

If you are arriving from the East (Livorno, La Spezia) by car:

No changes necessary here either. Road traffic arriving from the East (Livorno, La Spezia, etc.) via the A12 motorway will have a couple of direct routes to choose from in order to reach the city. The “Genova Nervi” and “Genova Est” motorway exits will take you to the city centre and the International Boat Show area without any changes.

The train lines to and from Milan, Bologna, Rome and to the “ponente” coastline (Ventimiglia and France) are all functioning as normal.
The metropolitan train line services have been reinforced, thanks to an agreement with the national rail company Ferrovie dello Stato and the local administration Regione Liguria, adding 46 regional trains between stations Genova Voltri and Genova Principe during work days (one train every 15 minutes).

In order to ease the pressure on transport for citizens and users, the public transport company AMT and the local administration Comune di Genova have launched a free bus service (“Servizio speciale SP” – every day from 6.00am to 8.00pm) between stations Genova Principe in Piazza Acquaverde and Sestri Ponente (on Via Hermada), running in both directions and stopping at the Cristoforo Colombo Airport (Arrivals, ground floor).
Frequency: 15 minutes. The service will be operational from 6.00am to 8.00pm. The service is free of charge.

The public transport service Volabus is functioning as normal.