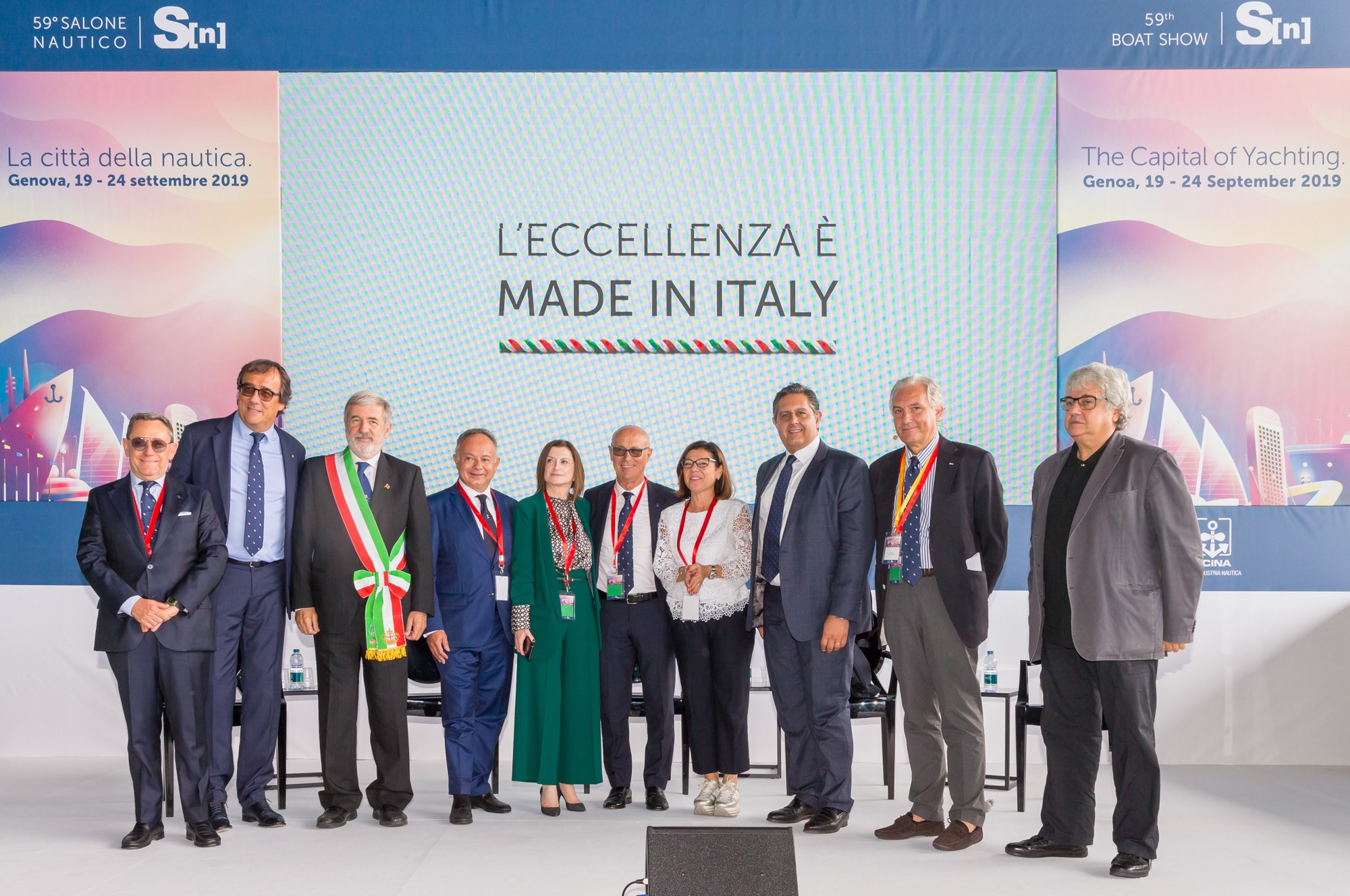 ITALY’S MINISTER FOR INFRASTRUCTURE AND TRANSPORT, PAOLA DE MICHELI, STATED: “WE ARE WORKING ON FULLY IMPLEMENTING OUR COUNTRY’S NAUTICAL CODE. WE NEED TO KEEP PUSHING TO KEEP OUR INDUSTRY AHEAD OF THE MARKET.”

SAVERIO CECCHI, PRESIDENT OF UCINA: “REACREATIONAL BOATING IS ON THE RISE. WE NEED TO HAVE AN IMMEDIATE RESPONSE TO THE OPENING IN THE MARKET CREATED BY BREXIT”

CARLA DEMARIA, PRESIDENT OF I SALONI NAUTICI: “IT WOULD BE REDUCTIVE TO JUST TALK ABOUT BREAKING RECORDS THIS YEAR. THE 60TH EDITION WILL OF COURSE STILL HAVE TO OUTDO THIS ONE. THE EXHIBITORS WHO HAVE BELIEVED IN THE GENOA BOAT SHOW EVEN IN THE HARDEST OF TIMES DESERVE TODAY’S SUCCESS.”

GIOVANNI TOTI, PRESIDENT OF THE LIGURIA REGION: “THE BOATING INDUSTRY as a whole IS DRIVING our COUNTRY’S ECONOMY. THE GENOA INTERNATIONAL BOAT SHOW SHOULD MAKE US ALL PROUD: THE SEGMENT IS italy’s proud and joy, a product we are proud to call italian”

MARCO BUCCI, MAYOR OF GENOA: “WE ARE ALL WORKING TOGETHER TO MAKE GENOA THE TRUE CAPITAL OF YACHTING”

Today, Thursday 19th September, was the first day of the 59th Genoa International Boat Show. An entirely “sold out” show boasting 986 exhibitors and 1,000 vessels on display. The inauguration began with the traditional flag raising ceremony carried out by the Port Captaincy Corps and Italian Coast Guard, accompanied by the docking of the Italian Navy’s frigate Alpino (F594) which honoured the Genoa Boat Show with a salute from the sea.

Below are the statements made during the opening ceremony.

Marco Bucci, the Mayor of Genoa: “Welcome to the 59th Genoa International Boat Show. I would like to thank UCINA for the Capital of Yachting concept, a concept we have welcomed because it is what we want for Genoa, all of Genoa wants to be the Capital of Yachting. Business is excelling, an enormous number of people work in the industry. Boating is a driving engine of our economy. We just need to roll up our sleeves and work together. We hope all of the visitors will fall in love with the boats they see, with the sea and with our city.”

Carla Demaria, President of I Saloni Nautici: “We are proud of what we have managed to do for this 59th edition of the Genoa International Boat Show; looking at the events scheduled to take place and the general sense of excitement surrounding the event, it already feels like we are celebrating the 60th edition. It would be reductive to talk about breaking records this year: this Boat Show is of course a record-breaking event with its 986 exhibitors, over 1,000 vessels and 13 diplomatic delegations. On the back of the overwhelming number of pre-sale bookings we have committed ourselves to an objective announced in back in June. With the help of all those involved, we will continue to strive towards transforming the Genoa Boat Show into an event that belongs to the city, with events that happen beyond the pavilions, not all tied to the same products but inspired by art and culture. This process began two years ago with the Piazza del Vento installation and will continue into the 60th edition next year, an edition that will have to face the challenge of outdoing this one: we have 98 events this year, including institutional conferences and moments dedicated to art, culture and design. The exhibitors who have believed in the Genoa International Boat Show in the hardest of times deserve this success. In closing I would like to thank the Italian Trade Agency for their support given to the Genoa Boat Show and all of their promotional initiatives.”

Mauro Ferrando, President of Porto Antico: “Genoa and its International Boat Show have always had a strong connection. It is “the” Boat Show, an event that has once again begun to grow thanks to the hard work of UCINA and that of the territory’s local authorities. Porto Antico is providing its spaces and services, and we will be keeping up a close dialogue with UCINA for future expansion.”

The authorities’ greetings were followed by the Inaugural Conference on “The Capitals of Yachting: values, territories and records” moderated by Antonio Macaluso, editorialist for the Corriere del Sera.

The conference was opened by Stefano Pagani Isnardi, Director of UCINA’s Market Analysis Department: “A few general figures: 1 euro invested in the boating sector generates 7 through the supply chain. As for employment, 1 employee in the shipyard segment creates 10 in the industry, in both directions of the supply chain. The sector counts 180,000 employees and has seen, over the past two years, an exceptional growth in employment which has increased by a staggering 20%”.

Saverio Cecchi, President of UCINA, added: “Recreational boating has been growing constantly for four years now. UCINA has always worked closely with the relative institutions. Minister De Micheli knows our sector well, and I am speaking to her directly when I say that we need to have an immediate response to the times, so that our companies can be more competitive on the international market. We hope that by the end of October the Nautical Code reform will have been completed.”

The new Minister for Infrastructure and Transport, Paola De Micheli, was next to speak: “I have been looking out for this sector for a while now and I thank this sector for not abandoning Italy during the crisis. Today, Italy is reaping the benefits from this decision. Over the next few days we will arrive at the final approval of the Nautical Code reform. Many are the challenges this industry will have to face, first and foremost that of the environment, something that can no longer be ignored. Many shipyards have already taken this matter to heart and the institutions also need to put pressure on it. There are urgent matters that need immediate attention along with a need to keep moving forward and aim to achieve the targets we have discussed. We need to keep our industry ahead of the market.”

Giovanni Toti, President of the Liguria Region: “This International Boat Show goes beyond all our expectations: it represents the certainty of overcoming a state of uncertainty. The boating industry as a whole is driving our country’s competitive edge. This is the fourth year of double-figure growth but we still need to aim high and never stop. We need to look towards the next 10, 30 years, the territory needs to provide the right infrastructure to keep developing. The Genoa Boat Show should make us all proud: the segment is Italy’s pride and joy, a product we are proud to call Italian”

Carlo Maria Ferro, President of the Italian Trade Agency: “Export is key for the boating industry, 87% of the sector’s value is abroad. In the first semester of 2019 exports grew by 28%, a very significant figure. The ITA is committing an ever greater amount of resources to the Genoa International Boat Show, this year 20% more than last year. With UCINA we have created a plan that has brought Genoa’s number of foreign buyers and journalists up to 150. Our support for this sector, for this Show and for this City as a whole.”

Ermete Realacci, President of the Symbola Foundation: “The boating system represents one of the sectors with the most potential for growth in our country, a point of reference for the entire world in yacht and recreational boat production. An unmatched leadership that has been able to create a world-class production network, working across the entire industry. The importance of the role played by the industry in supporting exports derives primarily from its ability to interact across many varied territories with specific production specialisations, the “capitals of yachting”: and in this network of specialisations lies the sector’s true quality, recognised by the international markets.”