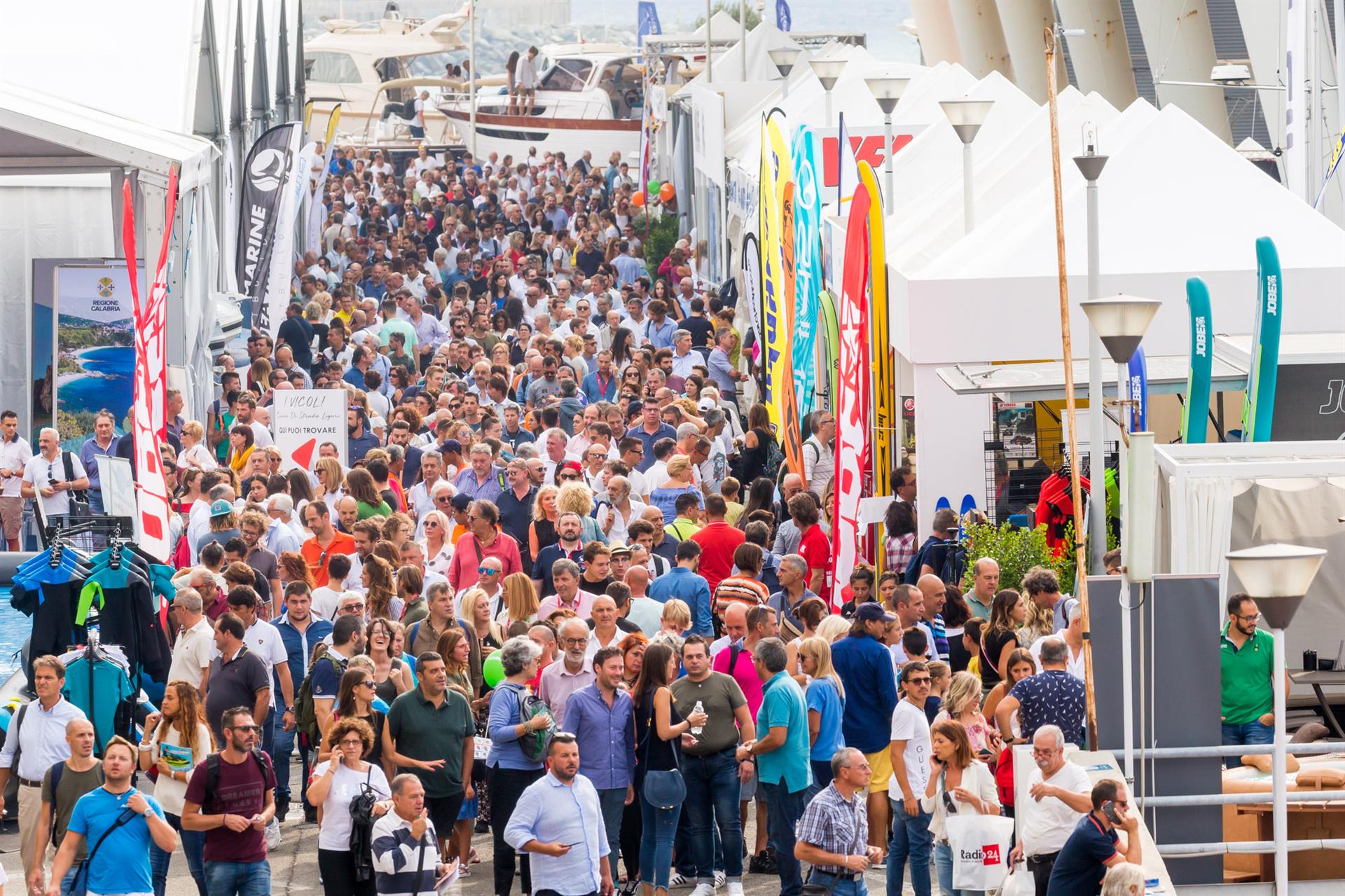 SAILING TAKES CENTRE STAGE WITH THE 151-MILE REGATTA, ALONG WITH SHIPOWNER OF THE YEAR AND THE TUSCAN ARCHIPELAGO CONTEST
THE INSPIRING ACHIEVEMENTS OF PELASCHIER, MARCO ROSSATO AND THE GARMIN FISHING TEAM
AWARDS ALSO FOR 10 YEARS TAKING PART IN THE BOAT SHOW

The show’s Teatro del Mare really took off today, a space in the Sailing World area where the most important sports and sea-related initiatives take place.
The programme kicked off at 11.00am with the presentation of the “Sentinelle del Mare in Liguria” (“Liguria’s Sea Sentinels”), a project organised by the Italian General Confederation of Enterprises and the University of Bologna, where citizens take on a leading role in gathering data about the environment and its biodiversity, through a fun and effective method: filling out an checklist of species spotted in particular areas.

The Italian Sailing Federation then took centre stage for the following events held on the stage of the Teatro. Starting with the presentation of the tenth, long-awaited edition of the “151-Mile Cetilar Trophy”, the offshore sailing regatta which will take off on 30th May 2019 on a route, which will see Livorno/Marina di Pisa/Giraglia/Formiche di Grosseto/Punta Ala, presented by the highest ranks of the three organising yacht clubs (those of Punta Ala, Repubblica Marinara di Pisa and Livorno). “A special edition, knowing this time will be the tenth one, aspiring to break all records of participation and enjoyment”, explained the President of the Punta Ala Yacht Club Alessandro Masini. “Last year we had 198 boats on the starting line, this year we aim to beat 200 and I am confident we will. The upcoming edition will be a magnificent 151-Mile Cetilar Cup, as innovative as it will be unmissable”.
After the 151-Mile event, the Italian Offshore Sailing Union (UVAI) – with the President Fabrizio Gagliardi and Technical Manager Riccardo Provini, alongside the Italian Sailing Federation’s Vice President Alessandro Mei – awarded prizes to the best owners in the latest season, with the overall title of UVAI Shipowner of the Year going to Stefano Masi, owner of the Swan 45 Ulika. “A truly rich and satisfying season for all offshore sailing: clearly our loudest applause goes to Masi and his crew, who have played a leading role in the world of regattas and have now finally reached first place in this ranking which for UVAI is obviously very important”, stated Gagliardi.
Next up was the award ceremony for the 2018 Tuscan Archipelago Contest, the circuit of regattas that includes the Queen’s Cup in the Netherlands, Pasquavela Offshore, the Lunga Bolina and the 151-Mile Cetilar Cup, won by Alessandro Giannattasio, owner of Super G, and the presentation of the Saracen Towers Regatta, an event championing sport, tourism, food and wine, scheduled to take place between the end of May and the beginning of June, starting in Sorrento.

Mauro Pelaschier’s 3.00pm event was a full house with audiences flocking to see the famous sailor and Giulio Magni with Alessandro Mei, Vice President of the Italian Sailing Federation. Pelaschier presented his circumnavigation of Italy onboard his wooden sailing boat, from Trieste to Genoa, to promote the activities carried out by One Ocean and to have as many people as possible sign the Charta Smeralda, a behavioural code of ethics aimed at safeguarding our seas. “I’ve been on the sea since I was 6 years old, a lifetime – stated Azzurra’s former helmsman – I’ve seen things change from bad to worse and now our seas are filled with plastic, we need a turning point and during my journey I appreciated how the younger generations are ready for a drastic change in common habits. Along with children from the many boating clubs where we stopped, we did our best to pick up the floating waste from beaches and marinas but unfortunately the seabed is equally littered with plastic which can’t be seen but is destroying the ecosystem.”

Another feat of circumnavigation, of a different kind but in the same spirit, is that accomplished by Marco Rossato, a sailor suffering from disability who set sail from the Venice Arsenale to finally arrive in Genoa during the International Boat Show after stopping at about sixty ports and verifying their levels of accessibility. “This journey has given me a great sense of confidence and has inspired me to do more – he told us enthusiastically – it was entirely windward which is not the best situation for a trimaran, but I managed the boat well and am ready to take on the Atlantic solo, in fact, I think by setting sail in the right time of year it will be easier to accomplish.”

The Teatro del Mare also hosted the “Fishing Team” presentation, a Sky programme dedicated to sea fishing with members of the Garmin Fishing Team. The event was held by Walter Ferraro alongside Garmin Fishing Team member Antonello Salvi. “We want to tell the world about Italy through its many varied fishing sports and through the experience of those who know these sports well”, explained Walter Ferraro. Antonello Salvi, Big Game world champion, told the audience about his 10-hour ordeal to catch a 305kg tuna. “The battle started at four in the afternoon and I just kept going until two at night. It was a very challenging experience, from a physical standpoint as well”.

EXHIBITOR EVENTS
10.30am: Professions and the sea: synergies for our Country’s sustainable development presented by CCIAA and the Order of Engineers (Conference Hall 1)
11.30am – 12.00pm: Evinrude_public speeches (stand BRP)