THE OFFICIAL PRESENTATION OF THE 58TH GENOA INTERNATIONAL BOAT SHOW (20TH TO 25TH SEPTEMBER 2018), TOOK PLACE  ON WEDNESDAY 16 MAY IN GENOA 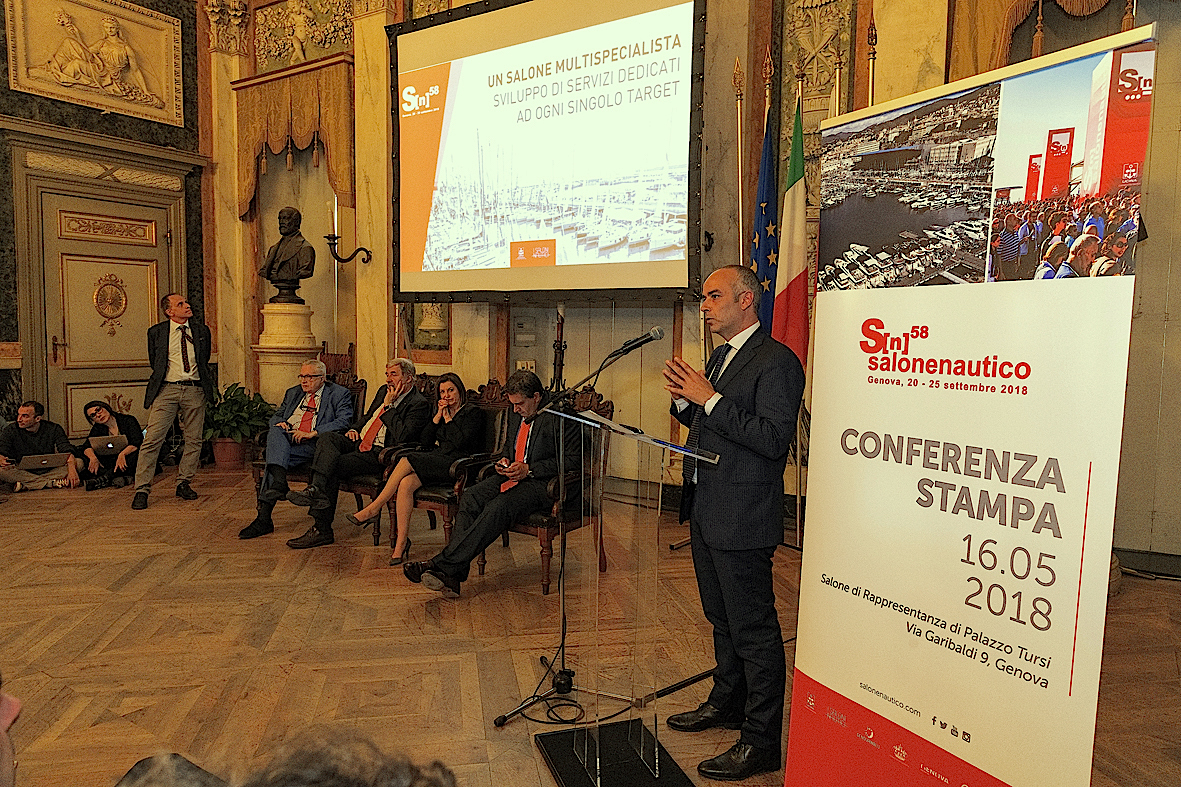 98% OF THE 2017 EXHIBITORS HAVE CONFIRMED THEY WILL BE BACK FOR THIS YEAR’S EDITION, WITH 64% REQUESTING MORE SPACE. AS OF 30TH APRIL, 57 NEW EXHIBITORS WERE ALREADY REGISTERED.

A NEW LAYOUT, FOUR EVENTS IN ONE, AND BENTLEY AND FASTWEB AS MAIN SPONSORS.

The latest news regarding the 58th edition of the Genoa International Boat Show organised by UCINA (the Italian Marine Industry Association), taking place between 20th and 25th September this year, was presented today in Genoa’s townhall, the Palazzo Tursi, inside its Salone di Rappresentanza. Speaking at the event were the Mayor, Marco Bucci, the Liguria Region President, Giovanni Toti, the UCINA president, Carla Demaria, and the Chamber of Commerce President, Paolo Odone.

“Welcome home. Welcome to the Genoa International Boat Show, recreational boating’s home for the past 58 years” – opened Carla Demaria, President of UCINA – “an event which has evolved over time to define and embrace the unique identities of all the market segments it represents, becoming increasingly specialised in each of them; the event’s outlook is, in a word, strong. As of 30th April, 98% of exhibitors from 2017 had confirmed they will be back, of which 64% requested larger spaces for their displays. There have also been 57 new requests to take part, 38 of which are from abroad”.

These are all key figures at the heart of yet another positive event, estimated to reach a 12% growth for the third year running. “The study carried out by UCINA’s Research Office regarding the 2018 forecast for the boating market has seen 69% of businesses confirm an upward trend in revenue, based on their order portfolio. The domestic market continues to grow, stimulated by the leasing sector which in 2017witnessed an increase in contracts of 58%”.

For the international boating industry, following 360 active days a year, the Genoa Boat Show is a key event and an engine for its development. “Between November 2017 and April 2018 – underlined Carla Demaria – we organised and took part in 7 events a month, both in Italy and worldwide, a feat which was accomplished with the help of the Made in Italy Plan along with the support of the Italian Ministry for Economic Development and the Italian Trade Agency (ITA), who have rewarded the Genoa Boat Show’s success as the most visited showcase event for this sector in the Mediterranean”.

While speaking about the 2018 edition, the Commercial Director Alessandro Campagna confirmed the “great number of innovations, both in terms of products and brands. The layout will be that of four boat shows in one, the result of an accurate study focused on developing sector-specific identities while providing tailored services for each area, allowing the represented sectors the necessary space to express themselves”.

How this year’s layout came to be and how it will enhance the visitors’ experience was explained by the architect Paolo Brescia, one of the creators, along with the OBR research team, of the “Piazza del Vento” project, launched at the 57th Genoa Boat Show and donated by the Italian Marine Industry Association to the city of Genoa. “In our plan for the 58th edition we want to transport the urban experience of Genoa out onto the sea” – he declared – “We are thinking of a town square on the water, a way of creating new sparks of interaction between people who will be able to meet others and enjoy being in a public space during their time at the Boat Show. A new perspective for the district, across the breakwater which in turn becomes an outpost on the sea, where visitors will be able to enjoy breath taking views of both the sea and the city”.

This same passion is shared by Bentley, a brand which has always fuelled the dreams of the automotive world and which this year will be the Official Car of the 2018 edition. “There is a unique gesture which symbolically unites the car enthusiast and the sailor and that is in their hands, in how they hold the steering wheel or their boat’s helm – declared Ado Fassina, Bentley Milan’s Dealer Principal – A gesture which creates that strong intangible sense of belonging which binds both worlds. For this reason, we are pleased to instil our own passion into the 58th edition of the Genoa International Boat Show”.

A welcome confirmation also came from Fastweb, one of Italy’s leading telecom companies. “We are proud to be part of the prestigious Genoa Boat Show once again this year and to inspire a certain affinity between a world of innovation and ultrafast connections with the world of boating, both passionate, dynamic and energetic environments” – declared Luca Pacitto, Head of Communications for Fastweb.