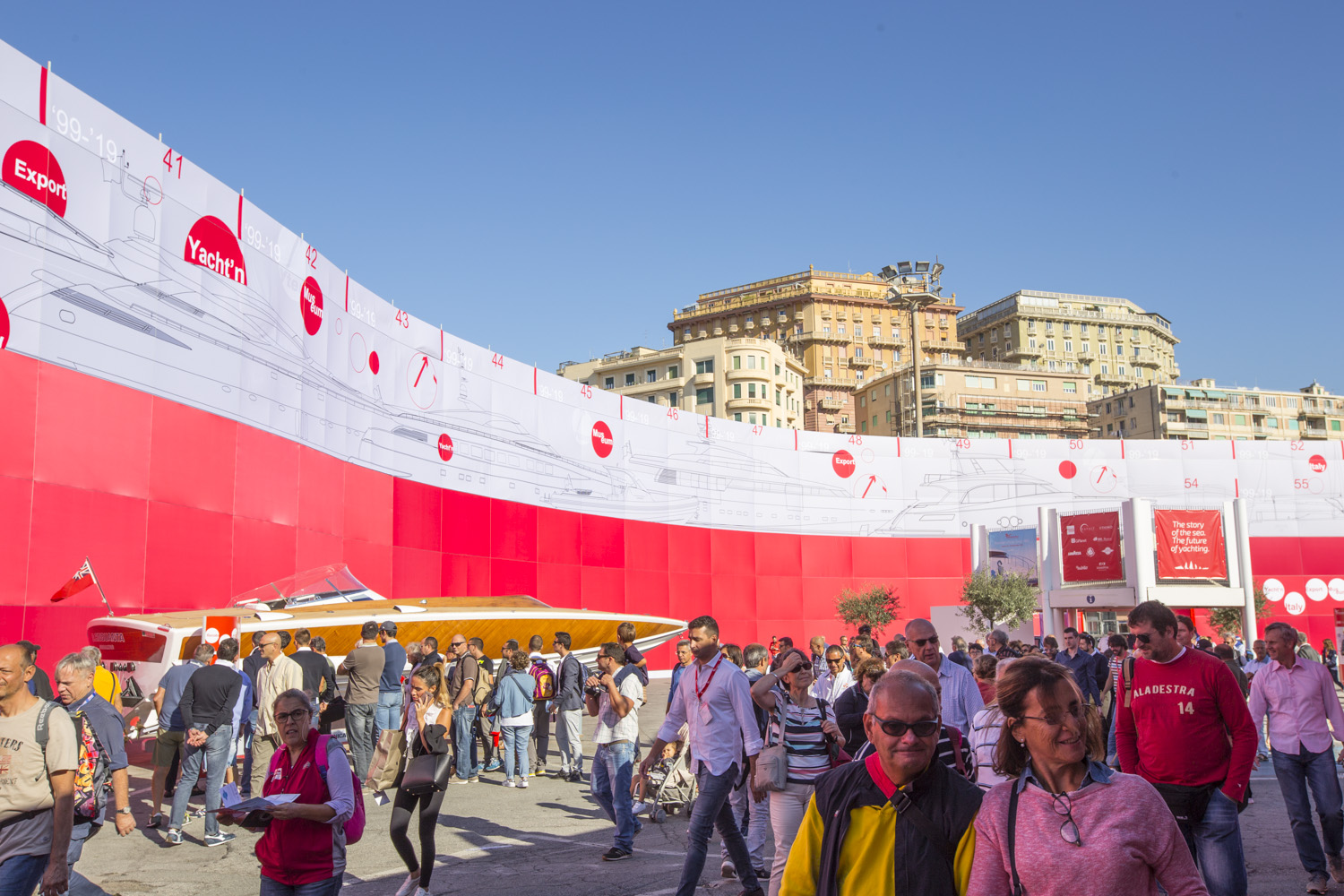 As proved by the official data published in La Nautica by UCINA and Fondazione Edison and illustrated today to the market and the press.

Olympic sports were today the main protagonists with the presence of two Gold Medallists from Rio at Teatro del Mare.

Today, the 37th edition of NAUTICA IN CIFRE was presented: it is the only ‘almanac’ of the Italian boating sector providing statistical data to the enterprises, institutions and operators of the boating industry and offering a quick reference tool for its comprehensive overview. The booklet is based on surveys and research carried out by UCINA Confindustria Nautica’s Market Survey Department, for the first time in collaboration with Fondazione Edison – as its scientific partner – and Assilea, the association of Italian leasing firms.

Prof. Marco Fortis Economic Advisor to the Italian Government and Vice President of Fondazione Edison, Carla Demaria, President of UCINA Confindustria Nautica, Gianluca De Candia, General Manager of Assilea and coordinator for the almanac’s publication, and Stefano Pagani Manager of UCINA’s Market Survey Department were all attending the presentation. “It’s a pleasure to present this almanac, because all the figures are positive and because of the added value from collaborating with Professor Fortis”, stated President Demaria, who added: “It is undisputable that things are improving. This year’s Boat Show marks the industry recovery, with more and more visitors every day, and, unlike previous editions, the participation of the entire supply chain, with 100,000 square meters of water basin surface and 80,000 metres of pavilions and outdoor areas.”

Looking at the figures, the industry’s total turnover in 2015 of 2.9 billion Euros and its 17.1% increase over 2014 are quite striking. It should be pointed out that the € 2.9 billion figure refers only to actual boating-related production, differently from standard reports, which generally also include non-core business lines. The number of direct employees – over 18,000 –, has also increased by 3%, coupled with a 19% increase in the boating industry’s share of Italian GDP and a domestic demand growing by 21%, as well as, at long last, with an increase in the number of Italian owners as confirmed, as mentioned by Gianluca De Candia, by “a strong domestic market increase in yard orders and excellent yacht leasing figures for new boats”.

Export data supplied by Professor Fortis are also outstanding: “Over the last two decades, inboard crafts have reported the highest export growth with a $ 1.6 billion trade surplus in 2015 –thus outranking pharmaceutical preparations – and landing the pleasure and sport boat sector in 20th place (out of 5,000 examined products) in Italy, in terms of trade balance performance. Exports shot up from 290 millions in 1995 to 1.7 billions in 2015”. Carla Demaria ended the meeting with some reassuring words: “Double digit results are also reported after the just ended boating year”.

Another comforting note: Mr Emanuele Piazza, Genoa’s Councillor for Economic Development, at a meeting with Carla Demaria about Renzo Piano’s Blue Print project envisaging a reorganisation of the Fair grounds, stated that: “This project must necessarily involve the boating industry as well as bear in mind the Boat Show’s value for the whole sector, which, as we all know, is an important driver of the Italian economy. Transformations, whatever their nature, must ensure continuity”. Carla Demaria, was pleased to hear this statement, which, she further commented, “will reassure all our exhibitors, who for many years have been investing their energies into this Boat Show, because they believe in its exhibition value and potential”.

Conversely, regarding Rome’s bid for 2024 Olympics, UCINA’s President commented: “I was sorry to hear that the Mayor of Rome has decided against hosting the 2024 Olympic Games. UCINA has sponsored the bid since we believed that it would offer a unique opportunity to our country in terms of image, as well as from an economic point of view. Cancelling the bid equals admitting that you are not able to organize it, which certainly does not cast a good image of Italy”.

The annual meeting of Assomarinas (Network of Italian Marinas) held in Pavilion B also sent a message of confidence for Italian marinas, which, over the last 2 years, have reported a recovery, made stronger by a return of international yachts, and also favoured by a VAT rate reduction to 10% for all berths in marina resorts of less than 12 months.

The first day of homage to Olympic athletes was held at Teatro del Mare (Sea Theater). Broadcast live on Rai Sport, the event was anchored by Giulio Guazzini with the presence of two of the best Italian medallists of Rio2016: Teresa Frassinetti, one of Italy’s women’s water-polo team members who won the silver medal, and Francesco Bocciardo, a great 400 freestyle gold medallist at the Paralympic games. Pietro Zucchetti, class 49r and Francesco Marrai Laser class, both Italian Tax Police Officers, were representing sailing. The Italian Navy was represented by Linda Cerruti and Costanza Ferro, Olympic synchronized swimmers.

At the end of the live show, Andrea Fornaro went on stage, speaking about his solo sailor experience sailing the oceans on board of his Mini 6.50 SiderAl 918.

Several other events followed throughout the day at Teatro del Mare: The route of legality 2017 – Sailing therapy and social rehabilitation”. A noble project helping social inclusion of young ex-offenders.

In the Boat Show’s Sea Channel, a T293 Match Race was performed with the participation of the Italian Team athletes. The winner was Nicolò Renna, followed by Riccardo Renna and Alex Jose Tomas, second and third place, respectively.

Sailing was yet again the main protagonist at Teatro del Mare with the meeting entitled Velaccessibile (Accessible Sailing) project by Associazione Per il Mare aimed at resuming the construction of the Rolling Blak sailing boat.

Several other interesting projects were also presented, such as The O’, dedicated to sport fishing and another on “Vibration/Soundproofing and Innovative Solutions for Onboard Comfort,” organised by Athena.

Finally, the awarding ceremony of the Adi 2016 design accessory award was held in UCINA’s Lounge.

Tomorrow, Friday 23rd September, in addition to the usual sea trials, there will be several other events held at Teatro del Mare, starting with Diportesis, at 11.00 a.m., presenting a project by Aspronadi, the Association of Yacht Designers, followed by another event paying homage to the Olympics.

At 1.30 p.m. the various teams taking part in the The O’ race sport fishing contest will be presented. At 2.00 p.m. Sandro Onofaro, sport fishing champion and captain will be talking about his Catch&Release project.

At the end, an hour of good music with Trio Groove Monkey’s blues.

The following events will be held on the mezzanine floor of Pavilion B: at 11.00 a.m., the 3rd Conference on Coastal and Maritime Tourism organised by UCINA Confindustria Nautica in collaboration with Federturismo.

At 3.00 p.m., a workshop will be held on Hull Insurance Policies for Yachts, organised by the Propeller Club, Port of Genoa (Sala A).

Sea trials will be ongoing all day long. The M32 Sailing Series Day1 event will take place in the regatta field off Corso Italia.