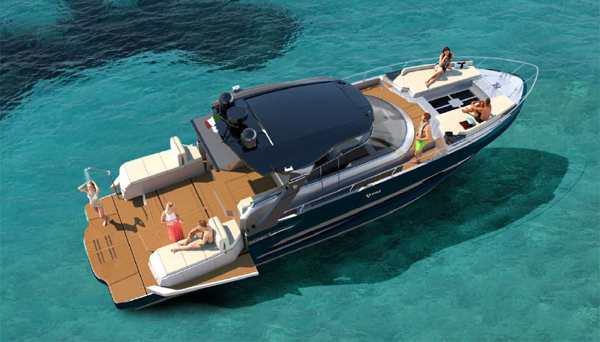 The 62nd Genoa International Boat Show will see the debut of the new 470 Regina by FIM expanding its Open line. As is the case for the 340 Regina, the 470 Regina is also designed by Paolo Ferragni, owner of Ferragni Progetti.

15.10 metres long with a maximum beam of 4.40 metres, the new 470 Regina is set to introduce the world to a new concept of organisation and use of the bow area. In fact, the separation of the classic bow sundeck into two side elements actually creates a new beach club.

The new configuration, referred to as Bow Life, thus creates a central space, a walking surface between the two side sundecks. The new space can become a small swimming pool or, if furnished with a table, a dining area.

The new 470 Regina, which can carry up to 14 people, offers room to sleep four plus two service beds in two versions that can be fully customised. Running on two Volvo Penta IPS 650s or IPS 800s, the model reaches a maximum speed of 39 knots.