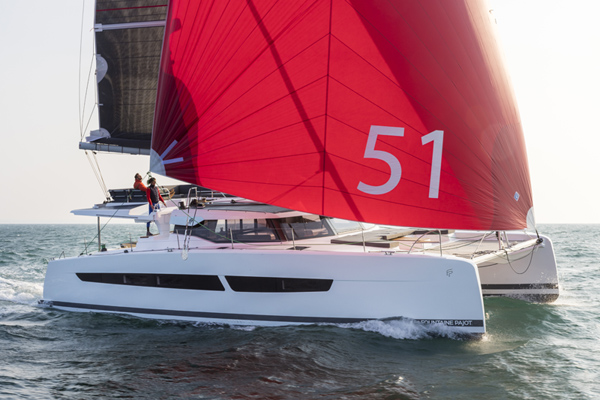 Fountaine Pajot confirms its environmental approach with the brand new Aura 51, which will be presented at the 62nd Genoa International Boat Show.

In fact, on the large flybridge of this 15.54 metres long and 8.08 metres wide cat with a sail area of ​​154 square meters, the yard has installed a series of solar panels that are both “flush” and completely integrated into the structure, capable of providing 2000 watts of renewable energy.

In addition, the model’s designer Olivier Racoupeau Design has conceived a full opening between the cockpit and the interior saloon which facilitates communication between the kitchen and the large cockpit table.

Inspired by the concept of maximum customisability the Aura 51 is available in four versions, starting with the Maestro version featuring a large owner’s cabin in the left hull, then we have the double or triple Maestro with the owner’s cabin and one or two VIP cabins, and finally the version with six cabins each with its own bath. The auxiliary power system features two 60 Hp or 75 Hp engines.