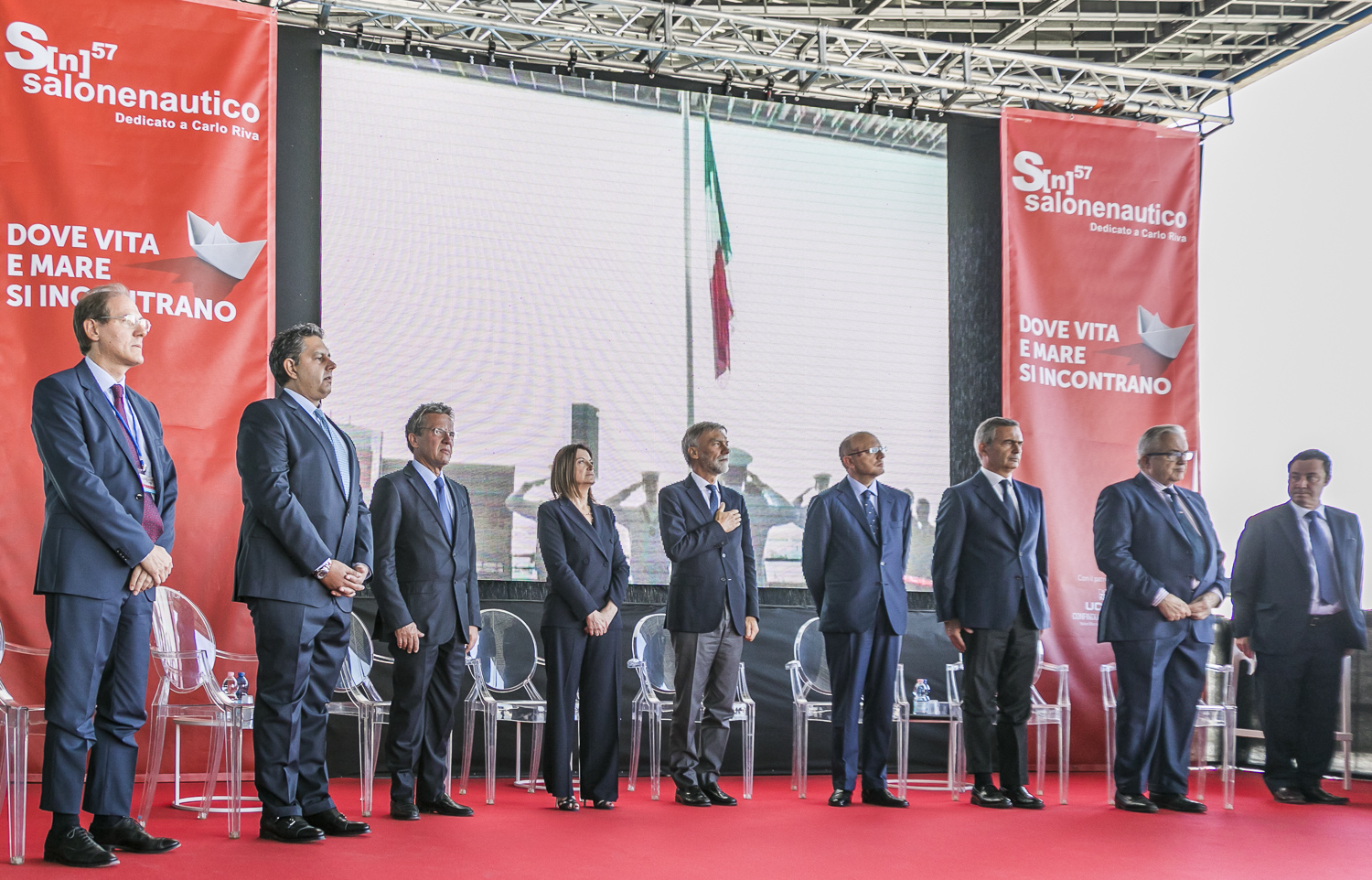 DELRIO: We are celebrating an ongoing recovery. The Italian government will finance the Boat Show

CASERO: The Government should keep ensuring its support, so as to foster continued growth in the boating sector
BOCCIA: The Confederation of Italian Industry is here at the Boat Show to support the activities of its professional association

TOTI: This boat show proves that the wind has changed

DEMARIA: This Boat Show is opening while witnessing a successful market trend (+24% on the domestic market) and a fruitful cooperation with the Institutions

BUCCI: Today we are opening an extraordinary event for the city, a magnificent showcase that Genoa is proud to welcome and host

Over 500 people, including authorities, VIPs, entrepreneurs, journalists and many yachting enthusiasts and visitors took part this morning in the Opening Ceremony of Genoa 57th International Boat Show, which was held on the Terrace of the Padiglione Blu (the Blue Pavilion).

After the flag-hoisting ceremony, the representatives of the local institutions – Genoa Mayor, Marco Bucci, the President of Port System Authority of the Western Ligurian Sea, Paolo Emilio Signorini, and the President of Genoa Chamber of Commerce, Paolo Odone – gave their welcoming speeches.

Very moving moments followed, when tribute was paid to Carlo Riva, to whom this year’s edition of the Boat Show is dedicated. The ceremony was attended by the late engineer’s family, represented by his daughters, Maria Pia and Lia, and his grandchildren.

The round table ‘Nautica: il ritorno, il futuro’ (The Boating Industry: the comeback, the future) then started, moderated by the Deputy Editor in Chief of Italian financial newspaper Il Sole 24 Ore, Alessandro Plateroti, and attended by the Italian Minister for Transport and Infrastructures, Graziano Delrio, the Italian Deputy Minister for the Economy and Finance, Luigi Casero, the President of Confindustria (the Confederation of the Italian Industry) Vincenzo Boccia, the President of the Liguria Regional Council, Giovanni Toti, the General Secretary of Italian statistical research institute Censis, Giorgio De Rita, and the President of UCINA Confindustria Nautica, Carla Demaria.

Minister Delrio stated: “Today, at the Genoa Boat Show, we are celebrating an ongoing recovery. We are working to make sure that the boating industry will soon benefit from a good Nautical Code”. Then, in his conclusions, Minister Delrio confirmed that “the Government will keep supporting the Boat Show and will finance it in the future”.

Minister Delrio’s speech was followed by that by the Deputy Minister for the Economy and Finance, Luigi Casero, who underlined that the Boat Show proves that “when technology and beauty take the stage, Italy is in the spotlight. The challenge posed by the market today is to follow Industry 4.0 and pursue constant innovation. Leasing has considerably contributed to growth in general; we now need to ensure that the same happens with nautical leasing too”.

Giorgio De Rita, the General Secretary of Italian statistical research institute Censis, in turn, declared: “A change is ongoing and, after securing their financial resources in banks, those who can afford to spend money are now doing so. We have to further foster this virtuous cycle”.

“This year’s Boat Show confirms that the wind has truly changed – stated the President of the Liguria Regional Council, Giovanni Toti. The recovery of the boating industry and of the Boat Show make Genoa very proud, as a city that deserves being the capital of yachting and of the Mediterranean basin”.

In Vincenzo Boccia’s opinion, “the Boat Show can be held anywhere, as long as it is in Genoa. There should be no confusion in identifying Italy’s priorities – if Confindustria had not taken a firm stance, today we would have two different boat shows held in Italy, and it would be useless for everyone. I am here to reiterate our support to the activities of our professional association”.

UCINA’s President Demaria closed the ceremony by expressing her satisfaction with the positive energy that is pervading the 2017 Boat Show: “This is Carlo Riva’s energy – commented Ms Demaria. The market is growing, the data we have available are very encouraging and tell us that the Italian market is growing by 24.1%. This Boat Show is the mirror of a market and a sector that have got over the crisis and deserves great attention by the local authorities and the institutions, who are indeed here today to officially open the Show together with UCINA”.