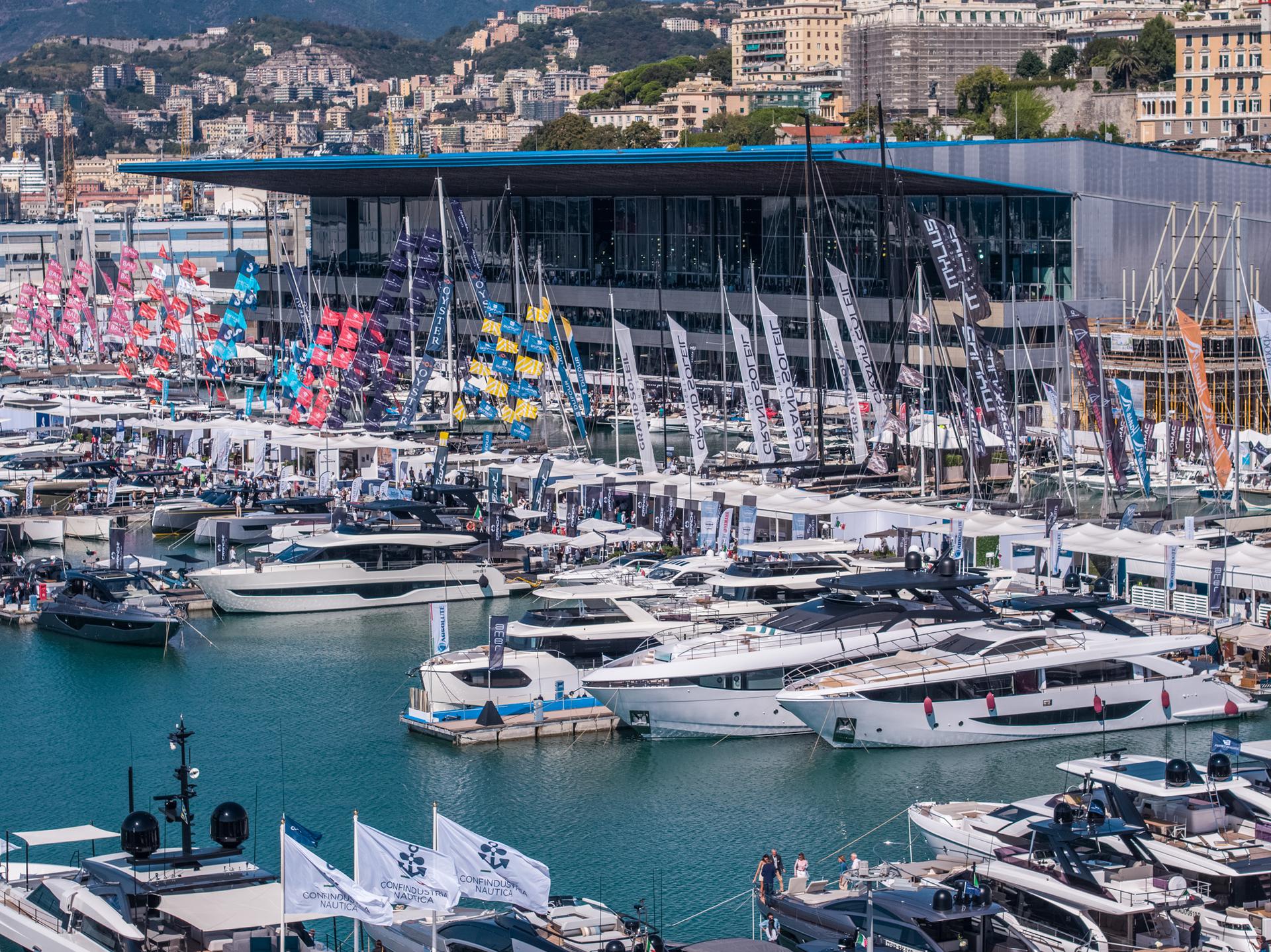 Today was a bright and sunny Sunday at the 62nd Genoa International Boat Show, a sold-out day with a brimming programme packed with talks and events.

The award ceremony for the 34th IREN Millevele regatta organised by the Genoa-based Italian Yacht Club was held this morning on the Terrace of the Genoa International Boat Show’s Blue Pavilion.

Gerolamo Bianchi, the Italian Yacht Club’s President, after announcing the record number of participants in the 34th edition with no less than 228 entries taking part, thanked IREN, the Yacht Club staff, the Harbour Office, and all the organisations that made the Millevele – IREN 2022 possible. We then moved on to the award ceremony, kicking off with the Coppa Boero Bartolomeo Challenge Trophy for the highest ranking ‘social’ boat in the largest grouping. The Trophy went to the Lega Navale Italiana Genova Centro.

Luca Dal Fabbro, Chairman of IREN, sponsor of the Millevele – IREN 2022, was present at the prize-giving ceremony commenting on a regatta that challenged this year’s crews with strong winds, heavy seas, light winds, calm and rain: “All possible conditions this time. A record for what is known as the Genoa Boat Show Regatta. Sustainability and protecting the sea are themes to which IREN is fully committed. An event that for the next three years will continue to  be branded IREN, a decision that stems from the fact that our heart beats in Genoa where our headquarters are located, that sustainability and safeguarding the sea are core values to which IREN is fully committed, and that the Italian Yacht Club is one of the oldest sailing clubs in the world.”

Today the Eberhard & Co. Theatre hosted the presentation of the 14th edition of the 151 Miglia-Trofeo Cetilar, the offshore sailing regatta organised by the Yacht Club Repubblica Marinara di Pisa, Yacht Club Punta Ala and Yacht Club Livorno. “The place to be” is the claim of this new, eagerly-awaited edition of the 151 Miglia, scheduled for 1st  June 2023 with participants setting sail from Livorno and cutting the finish line in Punta Ala after passing through Marina di Pisa, Giraglia and Formiche di Grosseto. “We chose the phrase ‘the place to be’ because it best represents the very strong bond that unites the 151 Miglia with the many sailors who take part every year with such enthusiasm and passion,” explained Roberto Lacorte, President of the YC Repubblica Marinara di Pisa and founder of the regatta.

This was followed by the event ‘The Boating Industry Lands in the Metaverse’, the world premiere dedicated to The International Yachting Media’s virtual space. The first part of the speech included a presentation of the Metaverse, enriched by historical and explanatory notes, with an in-depth analysis of its applications throughout the various market segments, and a focus on the opportunities for the yachting world. The featured theme was that of the “birth”, specifically during the Genoa International Boat Show, of The International Yachting Media’s Metaverse space, which has already reached thousands of users in just a few hours. A multifunctional and multimedia space, from which it will be possible to browse all six of the group’s publications, board two large yachts, an 80′ catamaran designed by Umberto Felci and the Vanguard, a 65-metre explorer yacht designed by Sergio Cutolo, and walk around in augmented reality. Luca D’Ambrosio, Founder and Editorial Director of The International Yachting Media, had this to say: “The Metaverse has developed vertically in recent years, arousing a lot of interest and investment: Meta (Facebook) and Microsoft have developed professional spaces and are investing 80 billion into what is an evolution of web surfing growing alongside its users. From the current 350 million, the investment will rise to 5 billion by 2030 with opportunities for all sectors including the yachting sector. The boat shows will be able to maintain their fittings and boats within their virtual space, which will be visitable virtually, as well as offering a wide range of services.”

In the afternoon, the Club del Gommone, with President Virginio Gandini, presented the European Raid 2022 and its protagonists, with testimonials, photos and videos. The event, sponsored by the Italian Marine Industry Association, took place this past Spring: an adventure that began in Rome (Fiumicino) on 27th April and ended on Sunday 12th June in Basel and saw the nine participating crews sail some 560 miles along the Mediterranean coastlines, 300 miles on the canals through France, 1050 miles on rivers (La Garonne, the Seine, the Thames and the Rhine) and more than 1,000 miles in the Atlantic, the English Channel and the North Sea. Stars of this adventure, together with the crews of the Club del Gommone, were Nuova Jolly’s Prince 22 and the Suzuki DF200 AP. Virginio Gandini: “Every year the Raids we organise attract enthusiasm and participation. Since 2017, when we organised the circumnavigation of Italy, we have grown by broadening our horizons, first reaching Gibraltar in 2018, then Athens in 2019, with a tour of the Peloponnese, and then turning our attention to the entire Mediterranean. This year we set our sights on the whole of Europe, travelling the continent across its seas, rivers and canals and targeting some of the most important capital cities, including London and Paris. We are already working on the next edition”.

Closing the events at the Eberhard & Co. Theatre was a meeting with Paolo Chiarino, ‘The Man of the Two Poles’, famous for his epic swims through icy waters, with water temperatures below a freezing -1 degree, all over the world. At the Genoa International Boat Show, Chiarino recounted, with many anecdotes, the emotions he experienced during his extraordinary feats, from crossing the Bering Strait, to swimming in the glaciers of Patagonia, in the water channels of the Hintertux glacier at 3. 200 metres in Austria, to crossing Lake Bajkal in Siberia and again in the Barents Sea: ‘After swimming in the waters of the South Pole in 2019,’ said Chiarino, ‘this year, in May, I repeated the feat with a swim in the Svalbard Islands, fulfilling my dream of becoming one of the eight men in history who have managed to swim 1,000 metres in the Arctic and Antarctic wearing a swimming costume. Travel and adventure are the driving forces that push me to carry out these swims; the experiences are unlike anything you can imagine and so extremely intense. The mind plays such a crucial role, it redefines the concept of human limits.”

The fascination of sailing, the importance of promoting our territory, and the great challenge of sustainability. These are the values of the #GenovaTheGrandFinale project, and the team continues to grow every day with exceptional ambassadors, inspired by Genoa becoming more and more the world capital of sailing and yachting.

However, visitors are enjoying more than just boats at the 62nd Genoa International Boat Show. Widening the horizons of the event was Giulia Selva, a hallmark name who has been a leading player in the Italian yachting industry since the very beginning, and who made her mark in the fashion world by appearing at the Fashion breakfast organised at the Boat Show’s VIP Lounge.

The designer presented her first collection branded Giuglia destined to be sold online and to take over markets abroad. The collection is entitled Fashion Wanderer and, like a wanderer, it recounts the 10 years the designer has spent between Italy and the rest of Europe enhancing her stylistic journey. The core values of this collection are “research into materials, craftsmanship and a-seasonality“, explained Giulia Selva. “There is also a strong connection to the sea with the Onda capsule, however the whole concept of Fashion Wanderer is linked to the continuous discovery of something new, just like wat happens at sea“.

10:30 am: The yachting mediator: role and activities– Organised by Assagenti, in partnership with the Italian Marine Industry Association (Innovation Hall)

10:30 am: Noise emissions above and below the surface.

12:00 pm: New designs for the city of water: accessibility and sustainability across Liguria. A maritime region where the best of the blue economy and yachting have come together to conceive new floorplans and modern urban spaces – Liguria Region and Liguria International (Blue Pavilion Terrace)

3:30 pm: Innovative solutions for comfort on board and noise emissions at sea – Organised by the Marine Centre of the University of Genoa (Innovation Hall)

4:00 – 5:00 pm: Liguria: the Road to Agenda 2030. From “blue growth” to “a sustainable blue economy”: initiatives and innovations at the heart of development policies. Testimonials from across the region in  view of the 17 OSS goals – Liguria Region and Liguria International

5:00 – 6:00 pm: The Water Code – Experiences, projects and initiatives for the sustainable management of water resources,  Organised by HELPCODE

Sixth and last day of programming at the Liguria Region’s stand: a slot will be dedicated to the municipalities that have been awarded the Blue Flag for the quality of their ports. In addition to the videos dedicated to the Blue Flag winners, which will be shown on the screens at the stand, space will also be given to the mayors of the winning locations for the enhancement of their cities and the activities of their landings.

From 10:00 am to 1:00 pm the Loano municipal administration will be present at the stand

From 3.00 pm to 6.00 pm the municipal administration of Alassio will be present at the stand

The tourism department of the Genoa City Council will be present with city pass totems for the promotion of tourism in the city at the stand.Genoa, 25th September 2022