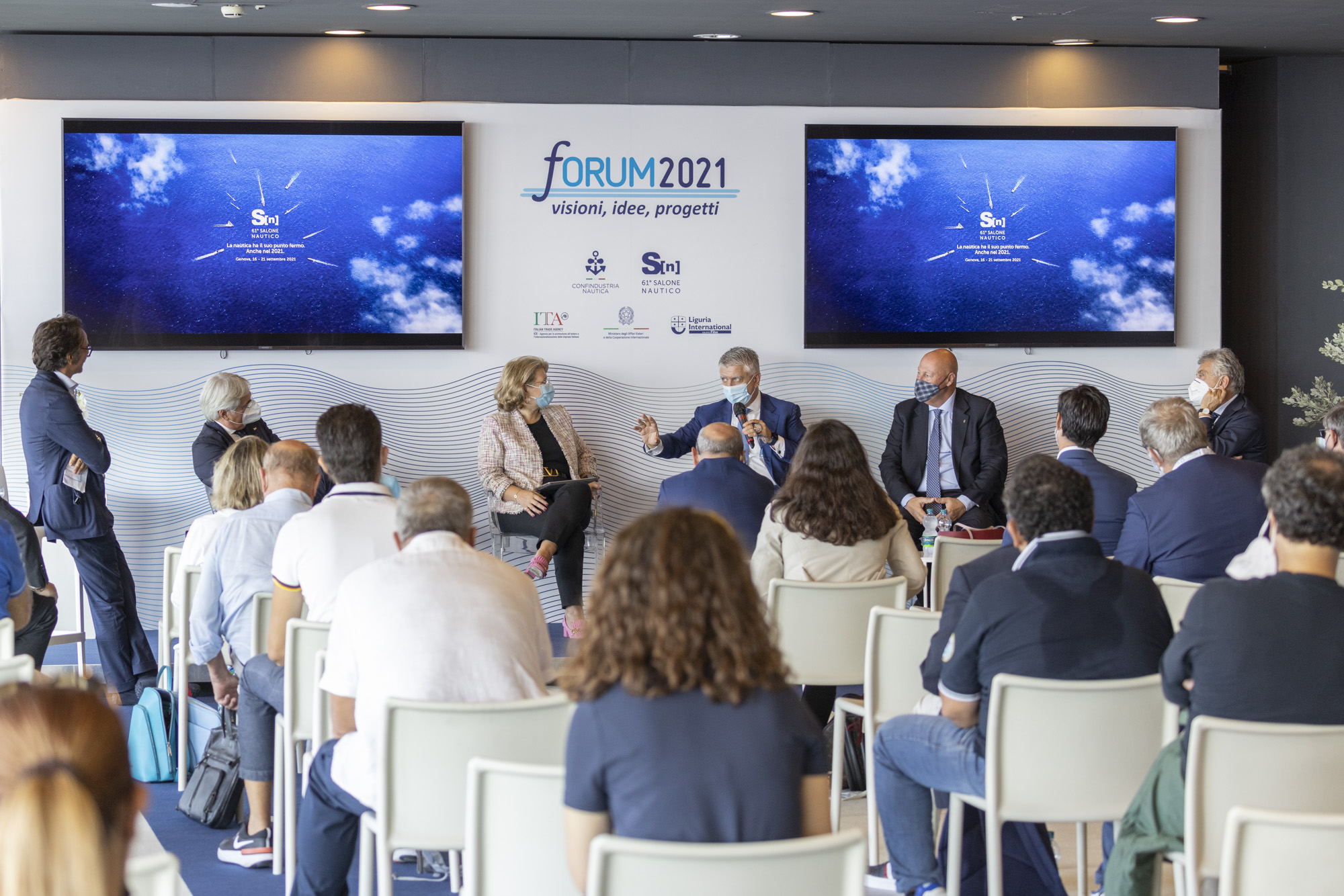 STATE VISIT FROM ITALIAN CABINET MINISTER MARIASTELLA GELMINI: “THE GENOA BOAT SHOW IS A SYMBOL OF OUR KNOW-HOW, EXCELLENCE AND RECOVERY”

BOATING INDUSTRY NETWORKS ON THE RISE

Day 3 of the 61st Genoa International Boat Show opened with the 8th National Boating Tourism Conference, focused on market trends and crucial issues such as the uneven application of VAT in Europe, which began with an opening statement by the President of the Italian Tourism Federation Marina Lalli. The event was moderated by the Institutional Relations Manager for the Italian Marine Industry Association, Roberto Neglia.

Despite the fact that the boating industry is currently experiencing a strong period of growth and that, overall, the boating tourism segment has proven to be one of the most resilient sectors during the pandemic crisis and a reliable pillar of the Made in Italy brand and Italian economy in general, tourism is still suffering. This is because of a loss of foreign clients due to anti-covid measures and because of a number of failures in the regulatory framework. There is a clear need for an all-encompassing policy dedicated to coastal tourism as there is for regulatory measures that can apply to all those components of the tourism-related supply chain that have yet to benefit from the government’s interventions aimed at helping the economy get back on its feet.

“The sea is a fundamental economic resource for Italy, an environmental heritage we need to preserve with effective protection mechanisms aimed at safeguarding the more sensitive marine and coastal areas, stated Presidente Lalli. From here the need to identify professional figures that need to be increasingly capable of expressing the true value of the boating world and the marine world in general, and the request made to the Government to tackle the issue of supporting the boating and tourism sector’s recovery, one of the leading industries currently driving Italy’s recovery”.

“After a decade of a relatively weak domestic market, underlined the President of Assomarinas Roberto Perocchio, marinas are now seeing an increase in revenue thanks to proximity tourism, even though we still have to reach figures as positive as those pre-2008, or those of 2018. What the operators are waiting for is for the Government to support the current recovery period by sorting out the legal controversy regarding past concession fees, protecting the national regulations that extend concessions to 2033 and making it possible to carry out redevelopment and dredging projects through the National Recovery Plan”.

The Hon. Marco Buratti recalled the work done by Parliament through the acceptance within the so-called August Decree of the rule that ended the controversy regarding the retroactive increment of public concession fees concerning marinas, in force since 2007. What remains to be solved is the deferred payment of any differences that have matured from the various recalculations, especially after such a disastrous season as that of 2020 which the positive performance of 2021 has not been enough to cover.

Senator Massimo Mallegni recalled how the Mayors had been abandoned in this particular battle and, when referring to the issue of extending concessions to 2030, promised Parliament would certainly commit to intervening where necessary.

As was underlined by Prof. Zunarelli, with regards to the Services Directive, also referred to as the Bolkestein Directive, operators are asking for a return to other forms of public intervention and more transparent procedures similar to those that had always regulated the sector.

The Forum events calendar continued with “Business networks throughout the boating world”, an opportunity to map out the latest industry networks organised by RetImpresa.

“We need to act as a system – stated Alessandro Gianneschi, Vice President and President of the Equipment sector for the Italian Marine Industry Association.Considering that 25% of boats produced worldwide are going to the US, it is crucial that we regroup and form buying networks, for example in the equipment segment, taking part in more trade fairs”.

Carlo La Rotonda, Director of Retimpresa added: “It is three years now since we started coming to the Genoa International Boat Show to present the data on business networks across the boating sector. This year’s data show another increase in networks and collaborations between nautical businesses. In 2020, collaboration contracts between companies across the industry are 13% more than they were in 2019. The average duration of network contracts is 3 years and 190 days. 687 companies from the boating world are currently part of a network, participating in 572 network contracts with over 33,000 jobs. Almost 2 billion euros of added value and over 7 billion in production. The data shows just how much the industry is spread across numerous segments and how companies are connecting with other supply chains throughout the country”.

Riccardo Rotundo,  ReteImpresa – Start-ups, Innovation and New Technology Area,illustrated their ReD platform (Reti e Dati – which can be translated into Networks and Data) which allows users to navigate through the principal data concerning network contracts, viewing them in an interactive manner:“we have digitalised, with the collaboration of Unioncamere, all of the network contracts into a more open-innovation format. The platform data is updated on a monthly basis. While the platform developed by RetImpresa is dedicated to start-ups who can upload their own innovative ideas. As of today, there are more than 100. The system is a marketplace where start-ups can give an adequate stage to their ideas, building collaborations with a chance to even gain blockchain certification”.

Environmental sustainability and the protection of biodiversity were the core themes of the many workshops that completed part of the 61st Genoa International Boat Show’s line-up today.

“RINAutic Live: Boating, the Green Mission”, organised by RINA Services and focused on promoting environmental sustainability in the boating world, is part of a calendar of events aimed at raising public awareness and that of industry professionals about the “Green Mission”, meaning the de-carbonisation of marine engines thanks to a series of very much valid alternatives such as internal combustion of alternative fuels (hydrogen, methanol), electric propulsion and hybrid set-ups. A future still waiting to be written, a future that holds exceptional importance on a strategic level and which concerns all segments of  the boating industry, and beyond. RINA representatives were joined on stage by Stefano Pagani, Director of the Italian Marine Industry Association Market Analysis Department.

The events calendar for the third day of the Show ended with “Clean Hulls – Essential for sustainable boating and marine biodiversity” organised by ICOMIA, International Council of Marine Industry Associations, represented by Albert Willemsen. Speakers included Stefano Pagani Isnardi, Director of the Italian Marine Industry Association Market Analysis Department, Jasmine Ferrario, IMO GloFouling Project, Simone Garofoli, Boero Group, Roberto Perocchio, President of Assomarinas, and Fabio Terzaghi, Keelcrab. The event emphasised the ever more pressing need to preserve our seas’ biodiversity by analysing the risks that derive from invasive species that are brought in on the hulls of ships and leisure boats.

The third day also saw a state visit to the Genoa International Boat Show by the Italian Minister for Regional Affairs and Autonomy, Mariastella Gelmini who had this to say: “I am thrilled to be here for the 61st Genoa International Boat Show, an important event that acts as a symbol of Italy’s know-how, excellence and recovery. I am pleased to see the commitment and attention given by boating businesses to the issues surrounding sustainability, an extremely topical issue and one that is at the heart of our National Recovery Plan”.