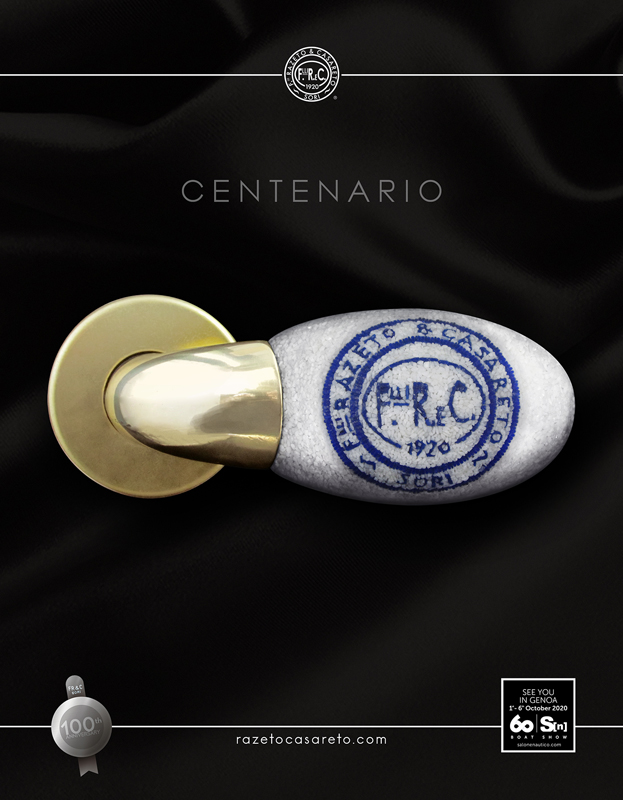 F.lli Razeto & Casareto, the historical company based in Sori (Genoa), will be celebrating a double centenary at this year’s 60th Genoa International Boat Show. The first is the Ligurian company’s 100th anniversary since its founding. The second centenary to mark such a momentous year for F.lli Razeto & Casareto is the name given to the handle designed specifically for the anniversary: the Centenario (Italian for Centenary).

“Our company” explain Andrea Razeto, the company’s CEO and Vice President of the Italian Marine Industry Association, and his brother Gangi, Creative Director behind the brand, “will be taking part in Genoa’s International Boat Show for the 52nd time and, looking back at its foundation back in October 1920, what better way to honour the company’s one hundred years of history than to celebrate its anniversary in the yachting capital in the same month almost exactly hundred years later”.

The Centenario handle’s design, which will see the production of a limited series of models, is the brainchild of F.lli Razeto & Casareto and another company with deep Ligurian roots: Vigo Mosaici, a long-standing company based in Campoligure, a town under the Genoa Metropolitan Area, and famous for its mosaics. The outcome of this partnership is the creation of a collection of artistically decorated luxury handles, made from local, recycled materials, where true art comes from exceptional know-how, creativity and not from precious materials.

The first Centenario handle, the n.00, which bears the company logo, reproduced through the meticulous creative process of a micro-mosaic, will be on display at the 60th Genoa International Boat Show. It will be the first of a series, a thread that will reach its conclusion in 2021 creating a limited edition of handles produced using recycled materials, namely the Genovese grit (locally known as zetto) salvaged from the rubble while the F.lli Razeto & Casareto offices were under renovation, back in August 2019.