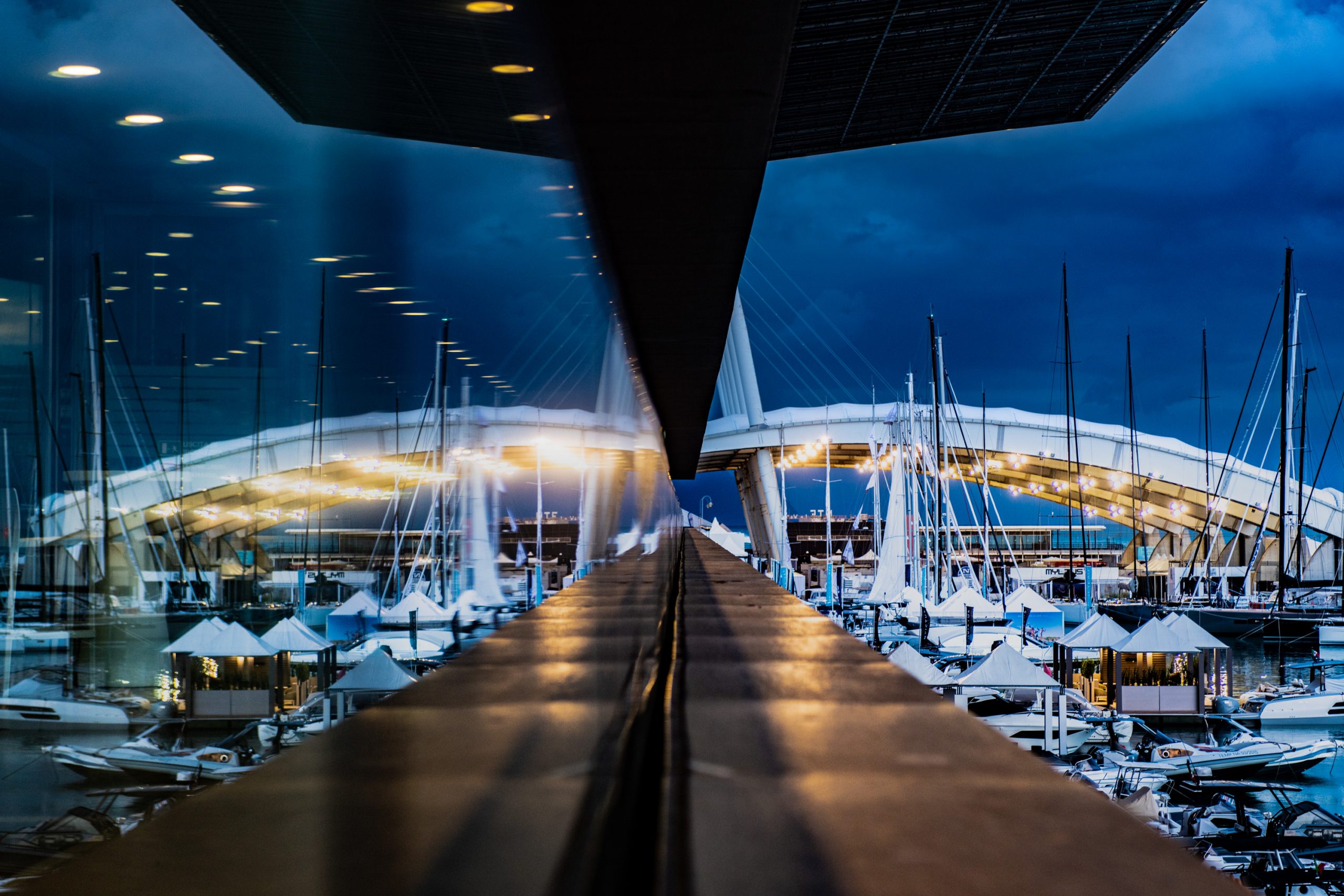 THE 60th GENOA INTERNATIONAL BOAT SHOW ENDED WITH A TOTAL OF 71,168 VISITORS

FEEDBACK FROM OUR EXHIBITORS

Tuesday 6th October marked the final day of the 60th Genoa International Boat Show, organised by the Italian Marine Industry Association and the company I Saloni Nautici, which, from 1st to 6th October, welcomed exhibitors, industry professionals and the general public to the heart of the Ligurian capital. Counting 824 brands on display and 71,168 visitors, the 60th edition became a shining symbol of economic recovery, focusing the world’s attention on the event and on the city of Genoa.

This year’s was an edition that defined a brand new concept for global events worldwide, dedicated to optimising the trade fair’s commercial effectiveness and providing quality contacts for exhibitors, all of which was achieved while remaining in full compliance with the relevant measures issued by the World Health Organisation and with the health and safety protocols determined by the Italian Technical Scientific Committee.

The Boat Show offered visitors, exhibitors and professionals a full programme of world premieres, seminars and institutional talks and conference, which saw the participation of a number of hallmark names from the world of business such as Luigi Gubitosi, Leonardo Ferragamo, Carlo Bonomi, Alessandro Profumo along with sports celebrities like windsurf Olympic medal winner Alessandra Sensini, the current Vice President of CONI and rowing champion Davide Tizzano, Giacomo Agostini, winner of 15 motorcycle world titles, and Giovanni Soldini.

Here is what the exhibitors had to say after the event:

Massimo Perotti, Sanlorenzo: “I would say the event has been overall a positive one, I Saloni Nautici managed to organise the only Boat Show in Europe, perhaps even in the world if Fort Lauderdale ends up being cancelled, we can’t know for sure right now. The Show was well organised, we’ve seen a lot of visitors interested in purchasing a boat, meaning there was a high percentage of buyers this year, both Italian and from abroad. In total we sold five models, two from Bluegame and three from Sanlorenzo to three Italians and two foreign buyers, a good mix. We are definitely satisfied”.

Francesco Guidetti, FIPA – AB YACHT – MAIORA: “Our company has been taking part in this Show since 1978, I’ve seen this event grow into its golden years. Genoa is the perfect showcase to promote your products to the world. Today is a moment of rebirth, especially after the unification of the Italian Marine Industry Association which has been a positive step forward for the entire industry. We didn’t see a lot of people, however among those who did visit the Show there were a lot of potential buyers this time. We work well with small numbers, we’re a company that doesn’t require a massive audience. In order to grow and improve, there needs to be a greater degree of participation and involvement on behalf of the city”.

Barbara Amerio, Gruppo Permare: “This has been a very positive Boat Show, with a decent number of visitors from Italy and abroad, from France and Switzerland. We have a lot of ongoing negotiations, having also recovered previous clients who are getting back into the boating world. The potential of being able to better trace ticket holders through the online ticketing service is an interesting tool for carrying out in-depth analyses of visitors and their countries and regions of origin. We also saw a great number of visitors who work in the fields of technological innovation”.

Maurizio Balducci, Overmarine: “Hats off to the organisers for yet another pleasant and safe Genoa International Boat Show. In this Covid era this edition has been essential for voicing the critical issues our industry is facing to the country’s politicians and institutions”.

Fabio Planamente, Cantieri del Pardo: “The entire sailing sector is pleased, both yards and dealers have closed a decent number of sales and negotiations are still underway for more. We are satisfied and thrilled that the Genoa International Boat Show could take place this year”.

Alessandro Gianneschi, Gianneschi Pumps&Blowers: “What really stood out for me at this year’s 60th edition of the Genoa International Boat Show is the passion that has united our industry, the determination to come together and be a part of something this important. The quality of visitors this year was head and shoulders above that of previous editions. As members of the components segment, our role is to be here and to support the boat market, I’ve received positive feedback from everyone here, despite a slight lack in foreign visitors this year. This edition went above and beyond all expectations”.

Anton Francesco Albertoni, Veleria San Giorgio: “When it comes to the Genoa International Boat Show we are always used to setting the bar high and this year did not disappoint. The Genoa Boat Show has always represented one of those historic moments that gets the boating industry back on track. This is why, as companies operating in this sector, we need more support from the Government and our country’s institutions. Visitors this year were truly moved by the level of passion that went into making this happen, nothing will take away the driving force this year’s edition has inspired”.

Andrea Razeto, F.lli Razeto & Casareto: “Congratulations on this year’s Boat Show, we now need to use the strength shown this year to take on an even greater, more influential role with regards to the City of Genoa. This edition has demonstrated how successful this industry is, now we just need to keep proving ourselves”.

Alberto Osculati, Osculati: “We are proud to have given our support to the Genoa International Boat Show by being here, this has definitely been a positive edition. The quality of visitors has increased, as has the Show’s usability, which is also due to the visitor quota system.”

Piero Formenti, ZAR Formenti: “Overall this 60th edition has been entirely positive. This year’s Genoa International Boat Show defied all expectations and even outdid many previous editions. What stood out the most was definitely the quality of visitors, which was made possible undoubtedly by the online ticketing system and by the larger walking areas, both inside the Pavilion and on the docks, allowing visitors to enjoy what they wanted to see and buy. Kudos to the organisers for facing and overcoming this year’s challenges. We have shown the world what Italy can accomplish, Europe as a whole has seen our example and can finally get back to organising international trade fairs.”

William Breventani, Ribitaly: “We’ve been receiving lots of compliments from everyone here for the Genoa Boat Show’s organisation, I’m very enthusiastic about this year’s edition. I didn’t expect so many people to overcome their fears to come and visit the Show. Our yard suffered a bit from a lack of foreign buyers and of course the weather didn’t help, making many test drives at sea impossible. An event like the Genoa International Boat Show with a primarily outdoor format should be held in the Summer”.

Umberto Capelli, Cantieri Capelli: “This year’s Genoa International Boat Show started off with a number of uncertainties, and yet it turned out to be essential for the industry. We closed an enormous amount of deals thanks to real interest on behalf of the visitors this year, it’s been the most successful event for us in ten years. The enthusiasm was beyond anything we had expected, the Show was organised perfectly and in the same way we have also been ensuring all health and safety protocols were followed throughout the week”.

Marco Valle, Azimut: “It is undoubtedly a good thing the Genoa Boat Show was able to take place, since it allowed the industry to give customers a chance to see the boats they had made appointments to experience in person. This year’s has been a fruitful edition, having closed deals and initiated numerous negotiations”.

Sara Massollo, Sunseeker: “The Genoa International Boat Show this year symbolises the industry’s chance to recover, being the only Boat Show in 2020. It seemed right to take part and try to get back to normal, something we’ve been missing over the past few months. We were keen to join the Show since we believe taking part is very important, we are here with our London office and with our French colleagues; we want Genoa to return to its former glory and give our City the relevance it deserves.

Giuseppe Arturi, Marine Group, Princess: “We had a few problems when it came to interfacing with clients, but nonetheless we are indeed satisfied with having taken part. The feedback we’ve been receiving has been positive, we were able to sign a number of sales contracts, something that has given us faith in the industry’s future. Our family has always supported the Genoa International Boat Show, we strongly believe in the event, trying each year to increase our presence. The Show’s improvements are always many and each edition we always notice something new.

Roberto Perocchio, Assomarinas: “All marinas taking part in the Genoa International Boat Show are pleased with how the event has gone, despite the fact that most of the industry’s ports were absent this year. Without the limitations imposed on the number of visitors each day and without fears with regards to the virus situation, we could have done even better”.

Angela Maisto, Evo Yachts: “Genoa is here for us and it’s been a pleasant return to the Ligurian capital. It was a risk coming here, we didn’t know what to expect, especially in terms of people coming to visit the event. And yet the Genoa Boat Show seems to have been very fruitful, there was an adequate and targeted audience, we were visited by many people who were interested and well-informed as to what they were looking for; as for us, we have nothing but positive feedback for the event.

Luigi Coretti, Adria Ship: “We are supporters and promoters of the Genoa International Boat Show, we believe that a Show that works is a mirror of a healthy market. This has been a positive Boat Show, there was a decent number of visitors, with many clients interested in buying. Despite the weather our experience has definitely been a positive one”.

Uberto Paoletti, direttore di Marina di Loano: “The best B2B event of the decade. We closed three deals just on the first day. Overall those who came to visit us at our Liguria for Yachting stand were competent and well-informed. The Boat Show has also been a key opportunity, the only opportunity this year, to meet up and compare notes with lots of industry professionals, and to measure the current state of the market as a whole”.

Pietro Negri, Negrinautica: “This year we joined the Genoa International Boat Show with a decent number of new models and a brand new series of products, we are pleased to have taken part in an edition that this year was a risky one for a number of reasons. Despite the weather not helping the event, we are still happily surprised by both the Boat Show’s success and its great number of visitors and exhibitors”.

Claudio Magazzù, Cantieri Magazzù: “From a commercial standpoint this year’s Genoa International Boat Show has been a success, well beyond any expectations. These Shows mirror the market, a market that, after being locked down for months, has seen a significant demand for boats along with more people coming back to the world of boating. Excellent responses from customers too who this year were particularly interested and motivated.