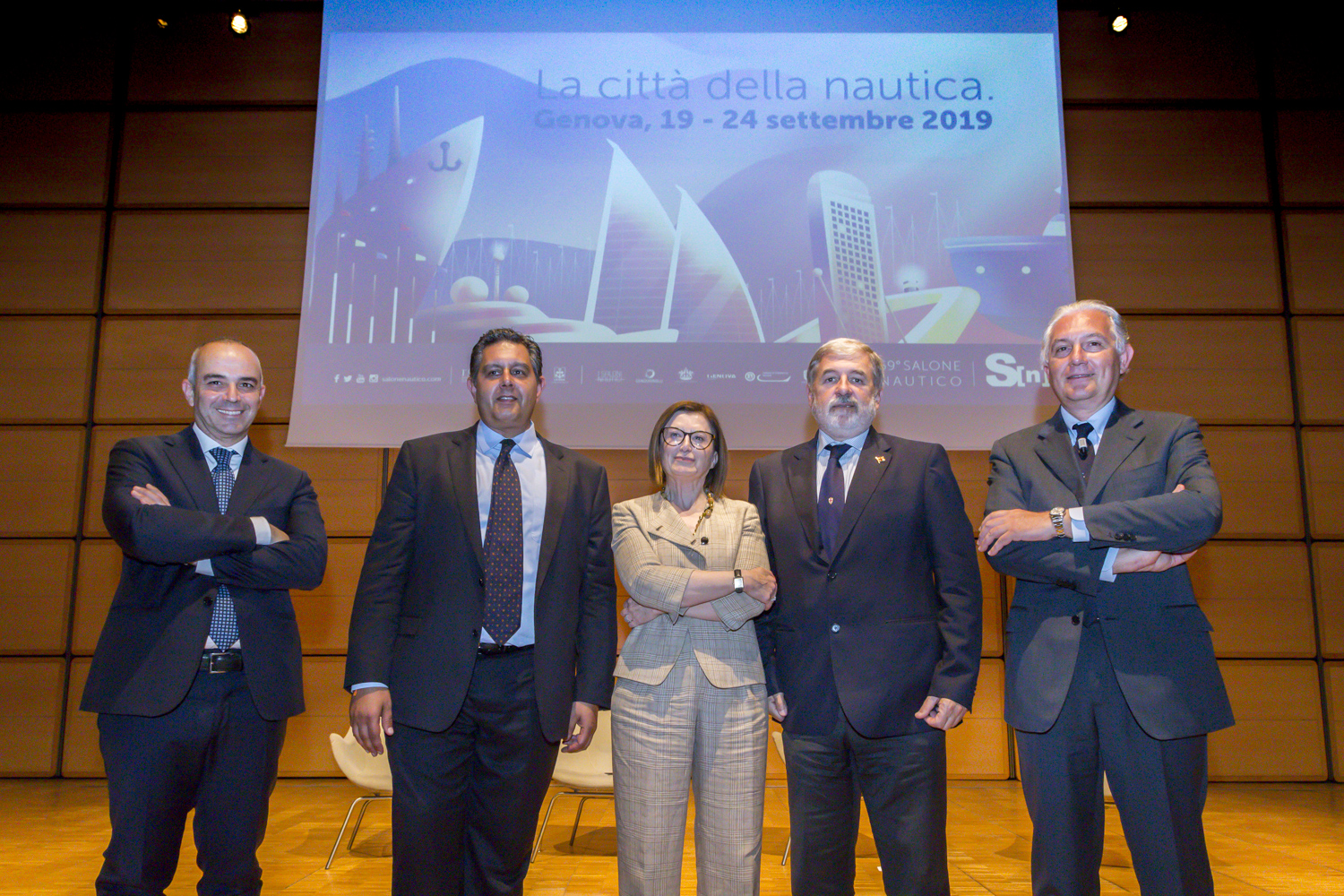 GARRONE, PRESIDENT OF IL SOLE 24 ORE: LOOKING FORWARD TO A BOAT SHOW THAT WILL SURPASS EVEN LAST YEAR’S EDITION

DEMARIA, PRESIDENT OF UCINA: THE ANTICIPATED SUCCESS OF THE BOAT SHOW, WITH ALL MARKET SEGMENTS OVERBOOKING TO TAKE PART, HAS INSPIRED US TO THINK EVEN BIGGER AND CONCEIVE OF A PROJECT THAT WILL INVOLVE THE ENTIRE CITY AS A WHOLE

BUCCI, MAYOR OF GENOA: WE WILL WORK TOWARDS AN EVEN MORE IMPRESSIVE “FUORISALONE”

TOTI, PRESIDENT OF THE LIGURIA REGION: LAST YEAR WAS A PROUD EDITION, AND THIS YEAR WILL BE AN EVEN GREATER CHANCE TO DEMONSTRATE GENOA’S RECOVERY

The conference kicked off with a greeting from the President of Il Sole 24 Ore, Edoardo Garrone, highlighting the important role covered by the boating industry for the productive sector as a whole, along with comments from Genoa’s Mayor, Marco Bucci, and President of the Liguria Region, Giovanni Toti.

Marco Bucci: “The aim is to offer an International Boat Show that keeps on growing and to go that extra mile, together, every year. In Genoa the boating industry boasts an exceptional revenue, not just for the industry itself, but for the revenue’s ripple effect on the city as a whole. The Genoa Boat Show, now reaching its 59th edition, has truly become the event of the year”.

Giovanni Toti: “We are proud to host such excellence as that of the boating sector in our Region. Last year’s was the Boat Show to mark Genoa’s recovery. This year’s will consolidate that recovery after 3 years of growth for a city that continues to develop and which I hope will host an equally impressive Fuorisalone”.

Carla Demaria, President of UCINA (Italy’s Marine Industry Association), began with an image of market trends for 2019, confirming the Italian boating industry’s good health. In fact, Italy closed with positive figures in 2018 for the fourth year running at an estimated rate of +9,5% based on the balance sheet predictions for 2018 and revenue growth estimates for 2019. Following a study carried out by UCINA’s Market Analysis Department, 63% of companies have stated that, in view of their order portfolios for 2019, they will be expecting an increase in revenue.

President Demaria celebrated the Genoa Boat Show with a video dedicated to the Made in Italy brand and the level of excellence Italy has to offer: from culture to food, from art to design. “Excellence is Made in Italy. Our shipyards export worldwide, we are a global market leader. And once again, so is our boating sector”.

“Three years running, this Boat Show, mirroring the success of its market, has witnessed double-digit growth. Having said that, knowing the content provided by the boating industry is at the height of excellence, we must now look at its container. And we should look at Milan’s Salone del Mobile to do so, the world-leading trade fair dedicated to design, with which we share the privilege of showcasing a product of the highest quality”.

This innovative path under the Made in Italy banner began with a tribute to Carlo Riva, to whom the 57th Genoa International Boat Show was dedicated. This was followed by the creation of the Piazza del Vento, the first artistic element introduced into the event and which consolidated an unbreakable bond between the International Boat Show and the city of Genoa.

“This year we will be celebrating the Capital of Yachting, redesigning and modernising the display areas starting with the entry route, where exhibitors and visitors alike will be greeted by the installation “from shipyard to courtyard” by renowned architect Piero Lissoni, created for the Sanlorenzo shipyard and exhibited as part of Milan’s Fuorisalone (a number of satellite attractions spread throughout the city during its own Salone del Mobile) – continued Carla Demaria -. A symbol of the union between sea, excellence, art and design under the Made in Italy brand”.

“Inspired by the increasingly certain success of this year’s International Boat Show – we are currently struggling to cope with the staggering number of applications from exhibitors -, we should be able to imagine a Boat Show that is more than a mere container for an exceptional product. We need to look to the best and the best is the Salone del Mobile, organised by the sector’s Association in Milan.

A concept that goes beyond the walls of pavilions and permeates the surrounding city while providing the very best from the world of design and style. The Fuorisalone’s value lies in its installations that pop up across the city. A global event. Milan, throughout the world, is indeed the Capital of Design.

Our ambition is to see Genoa become more than just the city that hosts the International Boat Show for six days a year. We want her to expand beyond the borders of a single show, thus also satisfying the need for more space, with more events that take place throughout the year, to become the Capital of Yachting. In order for this to be achieved we must come to an agreement with the city and define a much greater common goal. No other city has such a rich maritime history and culture as Genoa.”