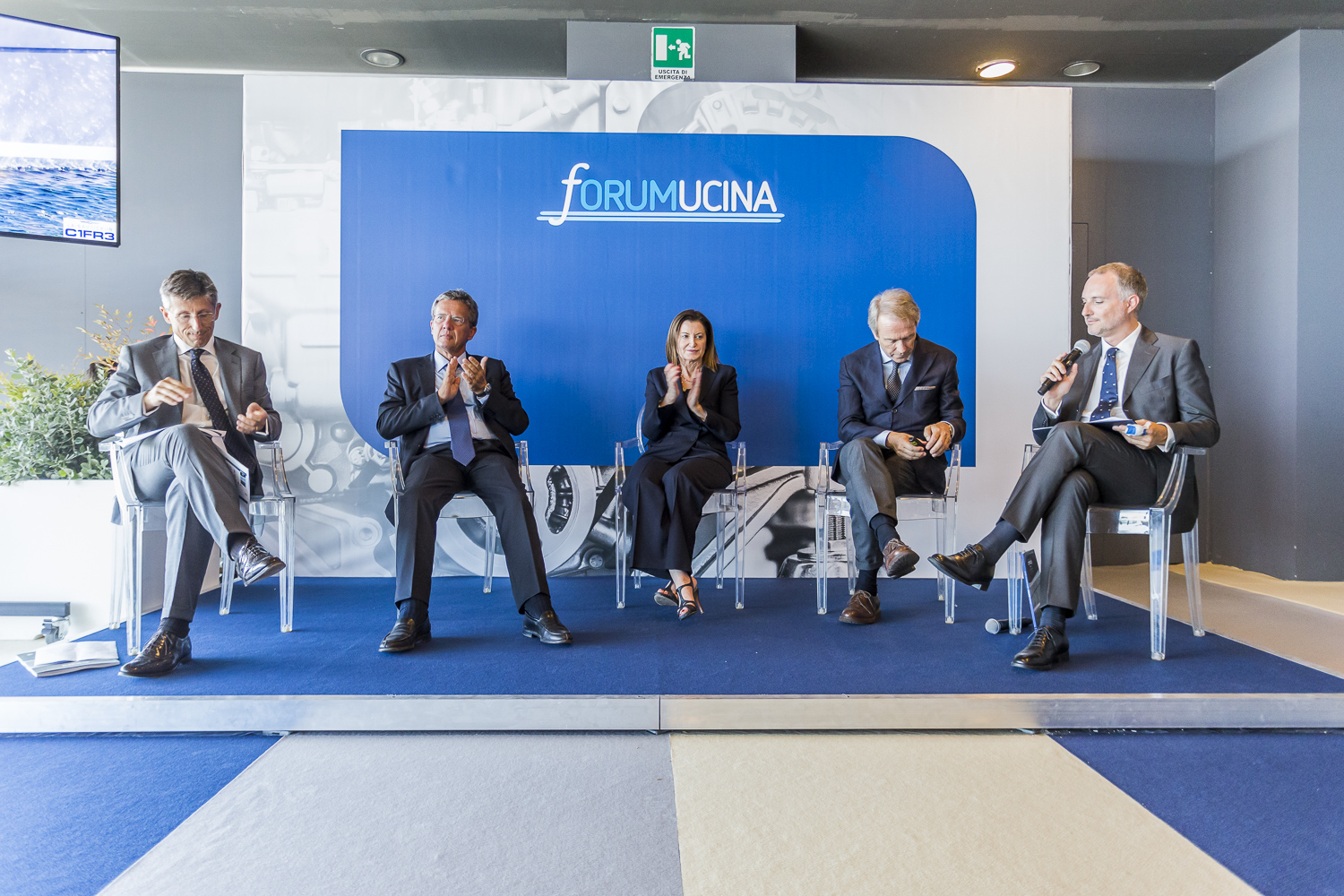 2017 edition of La Nautica in Cifre (Boating in Figures) presented.

Casero: The boating industry is one of the most attractive sectors for investment

Demaria: Now that the market is with us, we are ready to push the growth process even further

Fortis: The other sectors in the Italian economy are also growing, but the boating industry is surpassing expectations

Pagani: With a growth nearing 20%, overall turnover is finally showing a steady uptrend

Duranti: The trend is positive and we have seen a 25% increase in the number of yacht finance leasing contracts

The 38th edition of LA NAUTICA IN CIFRE (Boating in Figures) was presented today at the Genoa International Boat Show (21-26 September). Prepared by UCINA Confindustria Nautica’s Market Survey Department, in partnership with Fondazione Edison and Assilea (the Italian Leasing Association), and counting, from this year, on the important support of the Italian Ministry for Infrastructure and Transport, statistical report LA NAUTICA IN CIFRE offers a detailed economic analysis of the Italian recreational boating sector, providing companies, institutions and trade operators with key data and information.

Illustrated to a large audience of journalists and industry operators by Economic Advisor to the Italian Government and Vice President of Fondazione Edison Professor Marco Fortis, Vice Minister for the Economy and Finance Luigi Casero, President of UCINA Confindustria Nautica Carla Demaria, President of Assilea Enrico Duranti and Head of UCINA’s Market Survey Department Stefano Pagani, the figures in the publication are all extremely positive for the boating industry, which – as pointed out by UCINA’s President Carla Demaria during the press conference held in Genoa on 5 September for the presentation of the 57th Genoa Boat Show and as reiterated during the opening ceremony – is continuing its positive trend.

Getting down to numbers, the most important figure regards the overall 2016 industry turnover, totalling € 3.44 billion, with an 18.6% increase over 2015 (turnover has been calculated exclusively as relates to yacht and boat building operations). The number of directly-employed workers has also increased (now totalling 18,480, + 1.9% over last year) as have done the boating sector’s GDP contribution (1.92%, that is an 18.9% increase over 2016) and industrial production in the last 12 months (2.5%). Finally, confirming the overall positive trend, the domestic market for the boating sector as a whole has also grown, with a 21.8% increase (€1.15 million in total), as has done the domestic market for Italian recreational yacht and boat-building, with a 24.1% increase.

Following in the footsteps of recent years, data on exports – a sector which has coped with the recession better than others, thanks to Italy’s excellent yacht and boat-building reputation worldwide – are equally positive, confirming our country’s position as the top-ranking exporter of recreational vessels globally. Plus, we have also retained our international leadership in the construction of superyachts (above 24 metres).

Luigi Casero: “We believe that the boating industry is one of the most attractive sectors for investment, epitomising all that for which Italian-made products are famous worldwide. At a government level, we have been able to issue new legislation, aiming to give the boating sector fresh impetus, with recent data boding well for the future. If we could see equally positive results in other sectors, recovery, which has clearly already begun, would hasten its pace”.

Carla Demaria: “First thing first, I wish to thank Vice Minister Casero for being with us today. The fact that he has chosen to postpone his departure in order to be able to take part in this forum is a good sign indeed. There are times when giving a speech is difficult, but this is not one of those times, as we have been able to relay very positive data. Today, we have proven that by joining forces we can go very far. And we have only just begun. We have very ambitious projects. And now that the market is with us, now that we don’t need to just focus on survival, we are ready to push this process even further. I also wish to thank once again Minister Delrio. What has already been done with the new legislation on recreational boating is certainly a step forward; however, it’s not enough, and I have received assurance that more will be done to improve it and we will be able to have our say. If we receive the necessary support, there is no doubt that we will be able to do even more to hasten our recovery. And today’s data make us feel very proud of what we have done so far and what we are still doing right now. Last, I also wish to say that, beyond its data, this is also a very well-designed publication and I wish to thank all those who have taken part in its preparation, from our Market Survey Department to our partners”.

Marco Fortis: “The boating sector’s data express a remarkable energy. The world economy is recovering and, in this context, Italy is no longer bottom of the league. Not in the least. Without even looking at end-of-year GDP forecasts, results for the first six months are clear: Italy is second among G7 countries and its gap behind Germany is only by a few decimal points. All this without Italy even doing a massive use of public expenditure, also due to budgetary constraints. In all sectors where economic policy measures have been implemented, these have led to significant growth, of no lesser extent than in France or in Germany.

Employment too has experienced striking recovery and a great part of this growth has taken place in permanent jobs. The other sectors in the Italian economy are also growing, but the boating industry in particular is surpassing expectations. In the field of superyachts, we are top of the class, but data from the other boating segments are also excellent, also due to recovery on the domestic market.

Stefano Pagani: “The novelty for this year, in publishing terms, is that LA NAUTICA IN CIFRE is now being published in English as well. There is great interest in the Italian boating sector among global players and it is important that they are able to fully understand the dynamics of our industry. After a long decline, starting from 2008, overall turnover is finally showing a steady uptrend, with growth nearing 20% for the second year running. As we are back to 2011 turnover levels, we can now safely say, on the strength of tangible data, that the boating industry – having finally recovered from the consequences of some legislative measures that proved as harmful as ineffective – is ready to take off once again in Italy too”.
Enrico Duranti: “I wish to thank President Carla Demaria for this year’s wonderful event. I’ve been a visitor to the Genoa Boat Show for many years and I can already see that attendance is exceptional. Truly well done. In my role as representative of Assilea, I also wish to confirm all that has been said so far: the trend is positive. We have seen a 25% increase in the number of yacht finance leasing contracts, as well as a greater use of these instruments by commercial boating operators for the purchase of new boats.

Figures for 2017 are also growing, with an increase of more than 50% against the previous year for new purchases. We have recovered from the hardest times, during which we too, in the leasing field, have made our mistakes. Finally, to conclude on a hopeful note, GDP is growing also thanks to machinery and transport equipment and we, as leasing operators, can see that clearly. Let’s hope that the same happens in the boating sector. Let me also point out that the creation of an electronic archive would be extremely useful too. In the past, we have experienced some difficulties in this respect and believe that this instrument would be very positive for us”.

The conference day ended with a workshop on antifouling paint, led by ICOMIA’s environmental consultant Albert Willemsen and seeking to provide all the key information on the latest legislative developments on a European level and the related implications in terms of the use of antifouling pain in the recreational boating industry. The event also included the presentation of possible alternative solutions through which the industry will be able to adjust to legislative changes and continue to make, sell and use effective antifouling products.